There are few things harder to think about than the murder of a child. It truly is a heinous crime, and one made even more incomprehensible when a parent is found to have committed the act. These cases are tragic and difficult to work on, and the story of Ellie Butler is one investigators will remember for a lifetime.

In February 2007, 6-year old Ellie Butler was taken to hospital with severe head and retinal (eye) injuries. The police arrested Ellie’s father, Ben, for inflicting them. Ellie then lived in safety with her maternal grandparents until 2012, before a judge ordered her return to her parents. The return would prove fatal.

On 28 October 2013, Ellie was murdered by her father at his home in London. The story shocked the nation. Ellie’s tragic story is one of failure by agencies to protect children from harm. Sadly, it is also a story of how a case that should be clear-cut can be skewed by a lack of evidence and lies.

The defence took the stance that Ellie had sustained injuries to her head from falling out of bed. It was up to investigators to prove otherwise. Investigators had a potential murder weapon and Ben’s history of violence, but no way to tie them together. They needed a way to reconstruct the moment of the murder, but traditional forensic techniques led nowhere and were inconclusive. This led the prosecution to 3D printing.

After traditional forensic techniques proved inconclusive, the prosecution turned to 3D printing to recreate Ellie’s skull for testing. A digital CT scan of Ellie’s head and X-ray data was used to produce two 3D printed replicas of her skull.

Here are the skull models:

A pathologist then used these models to perform tests to attempt to tie the potential murder weapon to the crime – and it worked.

The pathologist was able to determine the full circumstances of the assault and tie the potential murder weapon to the crime. The 3D printed replica skulls proved pivotal in determining that the weapon used had “two geometrically distinct surfaces” which matched the claw hammer found at the scene. It’s important to note the claw hammer had been cleaned and there was no useful DNA evidence on it.

In this case, 3D printing and digital scanning helped solve a crime that could have otherwise seen Ben Butler walk away a free man. Up until this point, investigators had little to tie the two most important factors of the case together. The 3D printed skulls were presented as evidence in the murder trial, a first for the British Legal system. 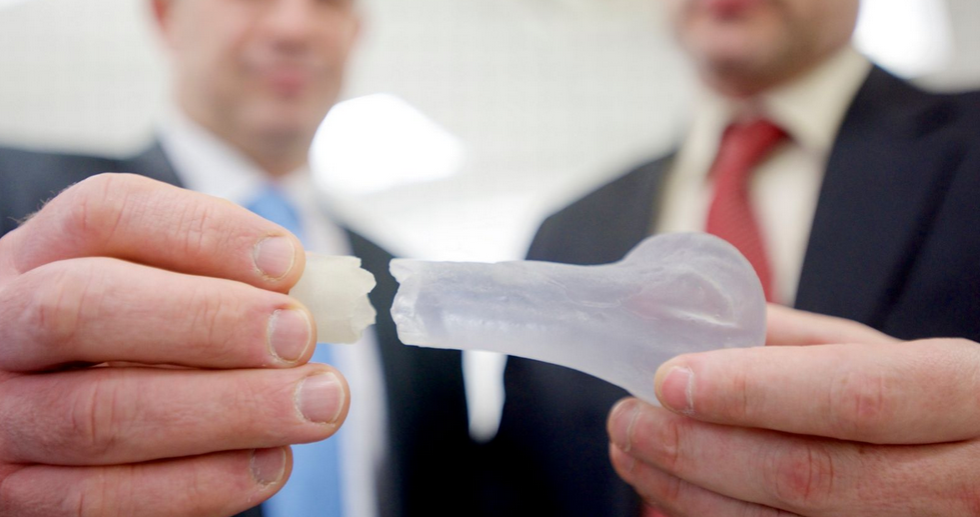 Imaged above: A bone used in the 2015 Lorenzo Simon case.

Highly detailed skulls and bone replicas are not the remits of fused filament fabrication printers in real crime environments. The technology of choice is stereolithography (SLA) or digital light processing (DLP) because these 3D printing technologies are more capable of producing the lifelike details demanded by digital scans and X-ray data. A good example of a capable SLA machine is the Formlabs Form 3.

The Formlabs Form 3 utilises an enhanced version of stereolithography called low force stereolithography (LFS), which addresses the biggest engineering challenge inverted stereolithography brings to desktop-size 3D printing – which is the significant forces exerted on parts during printing, which means parts can need a lot of support material. The Form 3 drastically reduces the forces exerted on parts during the print process, to reduce the need for support material, so more complex and intricate models can be made. This is highly beneficial when printing bones.

When scanning and 3D printing are done correctly, replica bones, skulls and murder weapons can help investigators and defences prove aspects of a case. The latest scans, for example, can detect very small injuries that would be missed by conventional equipment. In total, over 100 homicide cases have benefited from it.