A lot can happen in ten years. In 2006, ten years ago, Blu-Ray was announced, YouTube was launched and Apple released the first Macbook. Who knew that these would become as popular as they are today? Absolutely nobody. The success of these products has been incredible, and ten years from now, we will probably look back at the 3D printers of today with the same marvel. We will be astonished by how far things have progressed.

If there is one area of 3D printing where things will improve considerably in the next ten years, that area is speed. Our only real complaint with 3D printing – a complaint shared by many people – is how long it takes to print something right now. 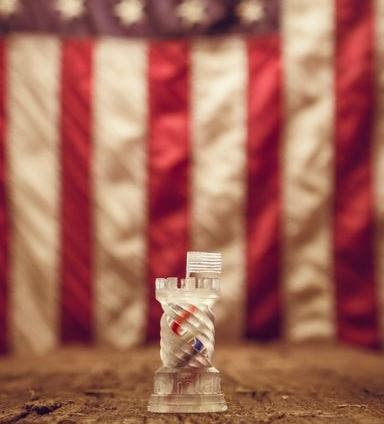 The typical print speed for a desktop 3D printer today is in the range of 50-100 mm/sec (that’s 50-100 mm of filament per second). That is actually quite fast, however that speed is offset by layer height.

For truly detailed parts, you need to print with incredibly thin layers.

So if you are printing at 20-100 micron, or 0.02-0.1mm, it is going to take you hours to print a complex object. For example, the build speed of the Formlabs Form 2 is 1-3 cm/hour along the Z axis, when printing at 100 micron. At that speed, it will take 1.5 hours to build Formlabs’ Twisted Rook, or if you print it at 20 microns, it will take around 8.5 hours. That’s actually a respectable speed, but for some using it for manufacturing purposes where speed is of the essence, it is not enough.

It may come as a surprise then that there are a few technologies out there right now that go way beyond those speeds. The first of these isn’t courtesy of a fancy new printing process, but a humble control board from a company called Create it REAL. 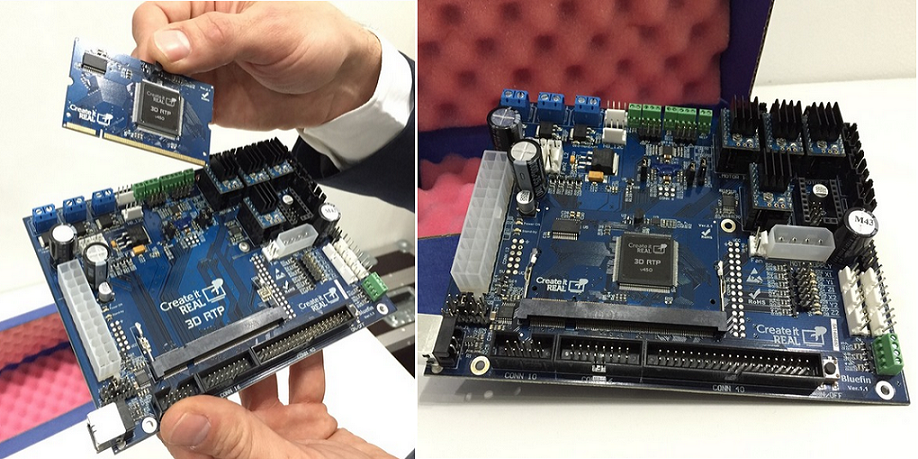 In 2015, Denmark-based company Create it REAL announced a new control board, the 3D RTP (Real Time Processor), which is capable of acting as the control module for all FFF, FDM and SLA 3D printers.

With the capability to boost print speeds to a staggering 455 mm/sec in any 3D printer, as well as significantly reduce vibration during the print process, Create it REAL’S 3D RTP was met with a lot of media coverage. Of course, the control board is limited by current extruder technology, but that doesn’t dampen its amazing potential.

The control board has already been successfully trialled by Italy-based company Dynamo 3D, who used the board in one of their D3D ONE EVO printers to print objects at 455 mm/sec. What’s even more staggering, is that Create it REAL plan on taking this all the way up to 1800 mm/sec. At those speeds, a complex object that would usually take 240 minutes to print at a speed of 180 mm/sec would be printed in just 24 minutes.

Here, we can see the D3D ONE EVO powered by Create it REAL in action: 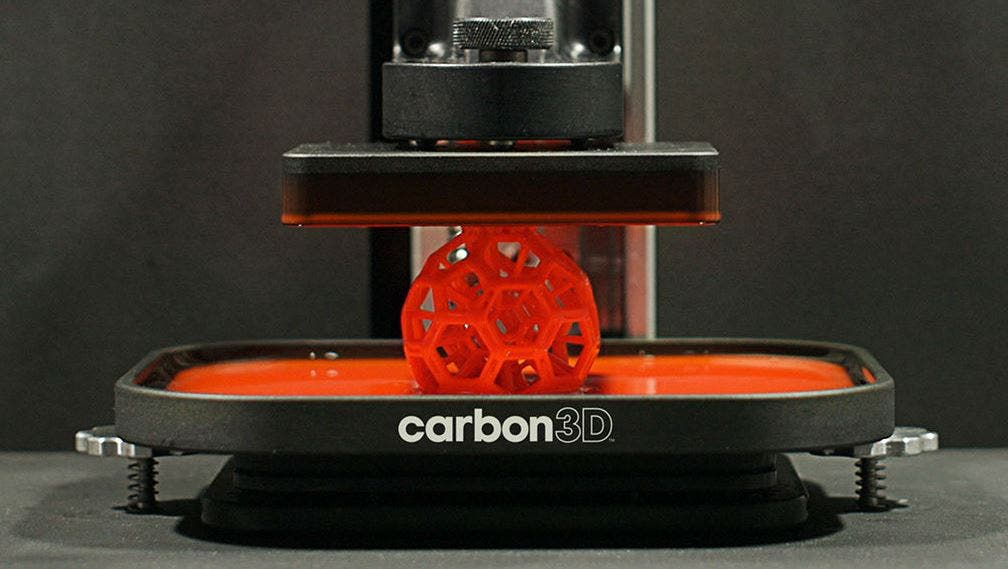 The second technology promising huge speeds comes from Silicon Valley-based Carbon 3D, who have $100 million in funding from Google Ventures.

Carbon 3D’s technology, Liquid Interface Production Technology (CLIP), promises print speeds 25-100 times faster than conventional 3D printing and at a quality suitable for end-use parts. CLIP at first glance is similar to stereolithography (SLA) in that it uses UV light to cure a resin, but it also uses another inhibiting agent, and that agent is oxygen.

UV light is the photo-polymerisation agent while oxygen is the inhibiting agent. By carefully balancing the interaction between UV light and oxygen, objects are grown from a pool of liquid resin 25-100 times faster than stereolithography printers. Carbon 3D explains, “At the heart of the CLIP process is a special window that is transparent to light and permeable to oxygen, much like a contact lens. By controlling the oxygen flux through the window, CLIP creates a “dead zone” in the resin pool just tens of microns thick (about 2-3 diameters of a red blood cell) where photo-polymerisation cannot occur. As a series of cross-sectional images of a 3D model is played like a movie into the resin pool from underneath, the physical object emerges continuously from just above the dead zone.”

Or basically, the pool of resin lies on an oxygenated surface, keeping it from solidifying (sticking), and the print head pulls up the solidifying resin, growing the object. This eliminates the need for a peeling mechanism, such as the one on the Form 2.

Here, we can see Carbon 3D’s CLIP technology in action: 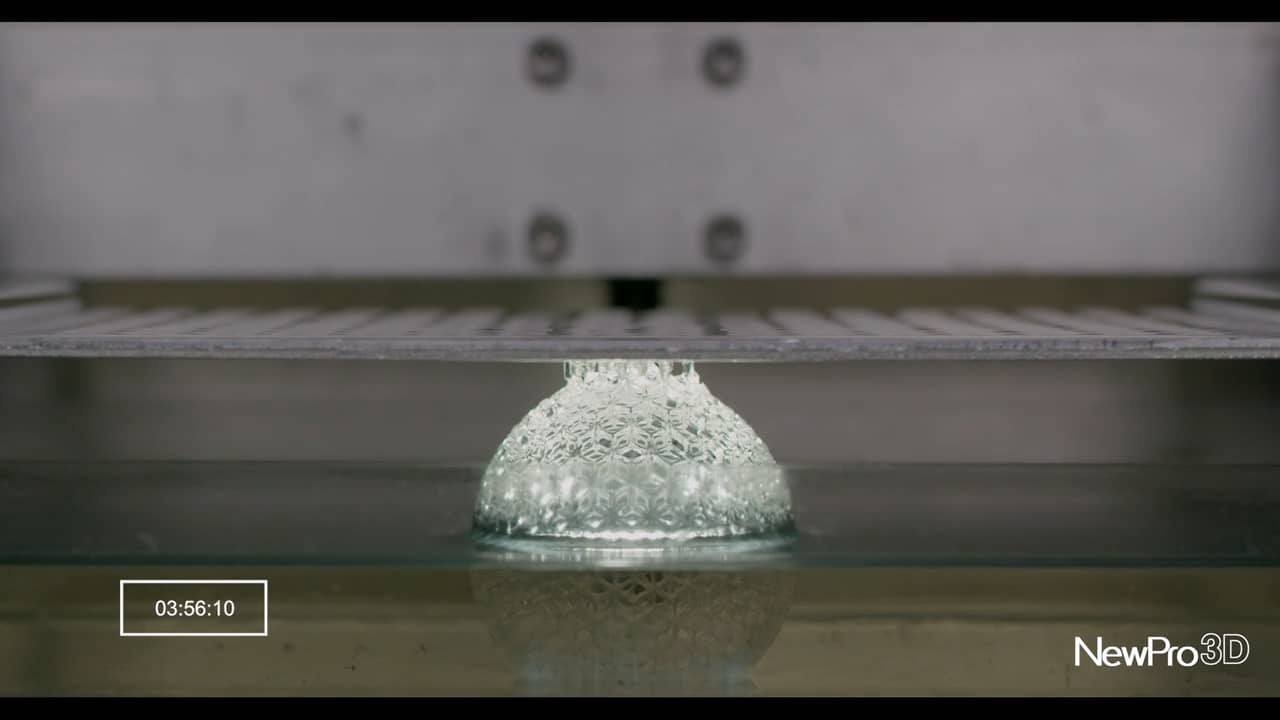 Like CLIP, ILI is similar to SLA. And like CLIP, ILI is a printing technology that eradicates the need for a sliding peel mechanism, to drastically improve the print speed. But rather than use oxygen, ILI uses a transparent hydrophilic membrane between the resin and the UV light source, to stop the bottom layer from solidifying. NewPro3D claim that their technology is better than Carbon 3D’s, because ILI works across the whole print surface whereas CLIP can only work effectively at the centre of the light cone – so they say, anyway.

NewPro3D also say their process is faster. The incredible speed offered by ILI is revealed on the company’s website, where they claim ILI will print a 55mm object in 4.5 minutes – that’s 2 minutes less than CLIP. Now that’s what we call speed, and for now, in the quest for speed, NewPro3D appear to be holding all the right cards.

Here, we can see NewPro3D’s ILI technology in action: