3D printing is a highly versatile way of manufacturing and rapid prototyping. In recent years, it has had a huge impact on many industries around the globe.

3D printing is a manufacturing technique that belongs to the advanced manufacturing spectrum. It creates an entity by layering elements level by level. A 3D printer isn’t complete until it has the components needed to manufacture, manage, and repair. Throughout its development, 3D printing has been known by many different terms, notably stereolithography and 3D layering, but 3D printing is the more widely used term today. 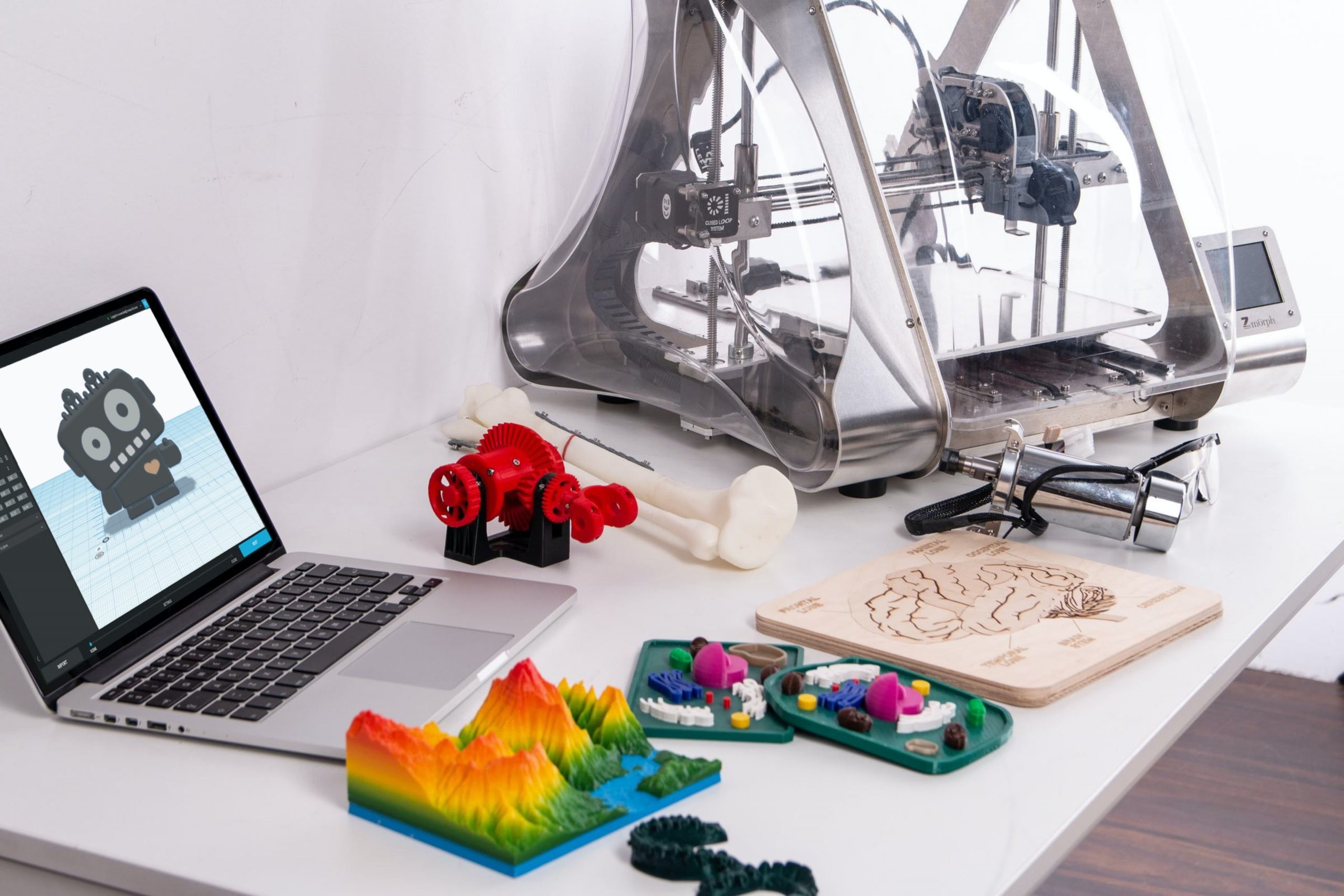 You might be wondering how 3D printers work? Below, we’ll go over the components of 3D printing and explain what they’re used for.

What Is 3D Printing?

3D printers are becoming increasingly commonplace in the manufacturing world today. Some people buy constructed machines, while others experiment with custom 3D printers. Understanding the various 3D printer components that make up this successful innovation is the most crucial, and exciting, part of working with custom machines. Although it can be challenging to execute the design in less time, the process provides a wealth of knowledge about 3D printer structure.

3D printers are complicated, but they can be quite simple to learn and use. First and foremost, it is important to understand the names of each component and what they all do. These 3D printer components make it possible to produce tiny to larger pieces.

The controller board is in charge of all electrical functions in a 3D printer, allowing the user to switch various elements on and off manually with a button. Without this, the printer would not function.

Whether you’re planning an upgrade or only repairing a damaged component, selecting the right controller board for your printer isn’t easy, because there are many different manufacturers and versions are on the market these days.

numerous choices when it comes to 3D printers, each model with its various advantages and disadvantages. Examples of 3D printers include formlabs 3D printers and Ultimaker 3D printers. New 3D printers are still being designed to print various elements such as metals, polymers and composites.

Nylon is a popular 3D printing material commonly used to create intricate and complicated shapes. It is liquified after being heated to a certain temperature and then put onto the printing surface. Layers of filament are then added until the finished product is created. It is important to note that not all 3D printers support nylon filament; some printers accept only specific filaments, while others accept a greater variety.

There are numerous choices when it comes to 3D printers, each model with its various advantages and disadvantages. Examples of 3D printers include formlabs 3D printers and Ultimaker 3D printers. New 3D printers are still being designed to print various elements such as metals, polymers and composites. 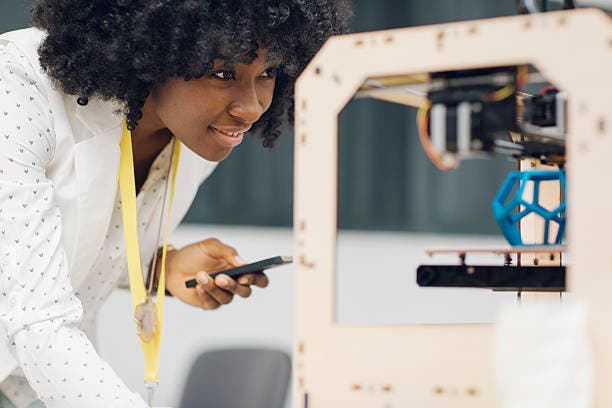 Nylon is a popular 3D printing material commonly used to create intricate and complicated shapes. It is liquified after being heated to a certain temperature and then put onto the printing surface. Layers of filament are then added until the finished product is created. It is important to note that not all 3D printers support nylon filament; some printers accept only specific filaments, while others accept a greater variety.

A 3D printer’s frame contains all of the electronic and structural components, holding all the parts in place which allows for the printing process to occur. The frame is simply a foundation for all of the electrical and structural components that operate together during the printing process. For manufacturers, the building of the 3D printer frame provides the most opportunities for innovative thinking and critical solutions.

Stepper motors are an essential component of 3D printers. Depending on the model of the printer, they are used for an array of purposes. Stepper motors are available in several sizes and are distinguished by their ability to travel to a distinct place in the printer and stay in that position. As well as in printers, they are commonly used in robotics, as they are powerful motors, capable of moving an element to a reproducible position.

A conveyor belt replaces the printing bed in a belt 3D printer. The 3D printer works at a 45° angle, with the conveyor belt moving after each layer. As a result, the Z-axis is potentially endless. Belt 3D printers are a comparatively new technology in the 3D printing industry, with the first machine appearing in 2017. The layout of this 3D printer is unique, as the gadget prints the layers at a 45-degree inclination.

A threaded rod is designed to be fastened with a screw and fixed in place. The overall process relies on friction – something to be avoided in a moving machine. A lead screw is significantly more solid, has a very smooth texture and is mainly built to move inside a screw. A threaded rod isn’t always straight and can quickly become clogged with dust and debris. In other words, a threaded rod will never be seen in an industrial machine.

This 3D printing component allows a 3D printer to hold an item on an axis in several ways, preventing it from breaking at the end of the axis. End stop switches are usually the most prevalent type, particularly in low-cost devices.

There are, however, different types of end stops available, such as optical and electromagnetic end stops. Regardless of the level of accuracy required and your budget, different end stops have various advantages and limitations.

Power Supply Units are typically large, metal containers with a series of screw connections or wires on one side and a fan. PSUs often include a converter that takes the 110 to 240 volts from the grid and converts them to a more manageable 12 to 24 volts. A PSU also contains a rectifier which converts the AC supply from the wall into DC current which is required by a 3D printer.

Like standard 3D printers, print beds in twin extruder printers are available in heat or non-heated configurations. Naturally, a heated print bed in a 3D printer is costlier than a non-heated equivalent. Still, a heating plate can improve the quality of prints, since the heat makes it less likely that your work will bend during the printing process.

Every 3D printer includes a manufacturing space. Nevertheless, not all these surfaces lead to satisfactory products; some perform well in initial layer stickiness, while others fall short. As a result, making the appropriate choice can be quite difficult. Every print surface has advantages and disadvantages and so, it is important to consider what you hope to achieve with your printer before purchasing one. The most refined 3D printer bed surface must still be combined with other high-quality components in order to produce quality items.

Every 3D printer includes a build surface. However, not all of these surfaces lead to satisfactory products; some perform well in first-layer adhesion, while others fall short. A standard 3D printer only has one print head, while a dual extruder printer has two print heads. Some dual extruder 3D printers may have only one print head but a dual nozzle which allows you to use two different filaments on the same build. A dual nozzle printer is ideal for printing many materials or colours.

The filament is fed to the print head through the feeder. The feeder gear must rotate efficiently to ensure that the precise amount of filament is produced. After hours of printing, tiny filament fragments may be left behind in the feeder. After 3 months of use, it is advisable to clean the inside of the feeder.

Effective maintenance of a printer involves the following steps:

You can now clean or change the extruder unit’s motor. A grub screw secures the gear. If you upgrade this gear, ensure that the new gear’s grub screw is secured with adhesive or a similar solution and that the grub screw is not protruding from the gear unit.

The twin extruder 3D printer is a really powerful machine. Its impressive technology allows users to 3D print beautiful, intricate items with secondary materials such as water-soluble supports or strong materials for stabilisation. These flexible, advanced 3D printers are well worth considering.

Firstly, verify that the 3D printer has an easy-to-use interface (UI) which allows the device to be operated via several devices. It’s important to ensure that the user can operate the platform from a typical computer, a mobile device and, in certain situations, even a web browser.

STL is the most widely used and universal file format for 3D printers. Most 3D printers will be linked to your PC through USB via a printer cord in the USB port. Wireless, Ethernet, and Memory Sticks are also common ways of linking printers, it’s important to check that this USB port is operational so that no further communication problems emerge.

Nowadays, more and more organisations across a variety of sectors are adopting 3D printers, mainly because they offer numerous, significant benefits when compared to other, conventional manufacturing techniques such as additive manufacturing processes. Indeed, 3D printers are best known for their efficiency, scalability, and financial benefits, but 3D printing is also far more advantageous than conventional industrial methods in terms of manufacturing lines, experimentation, micro-enterprises, and academic use.