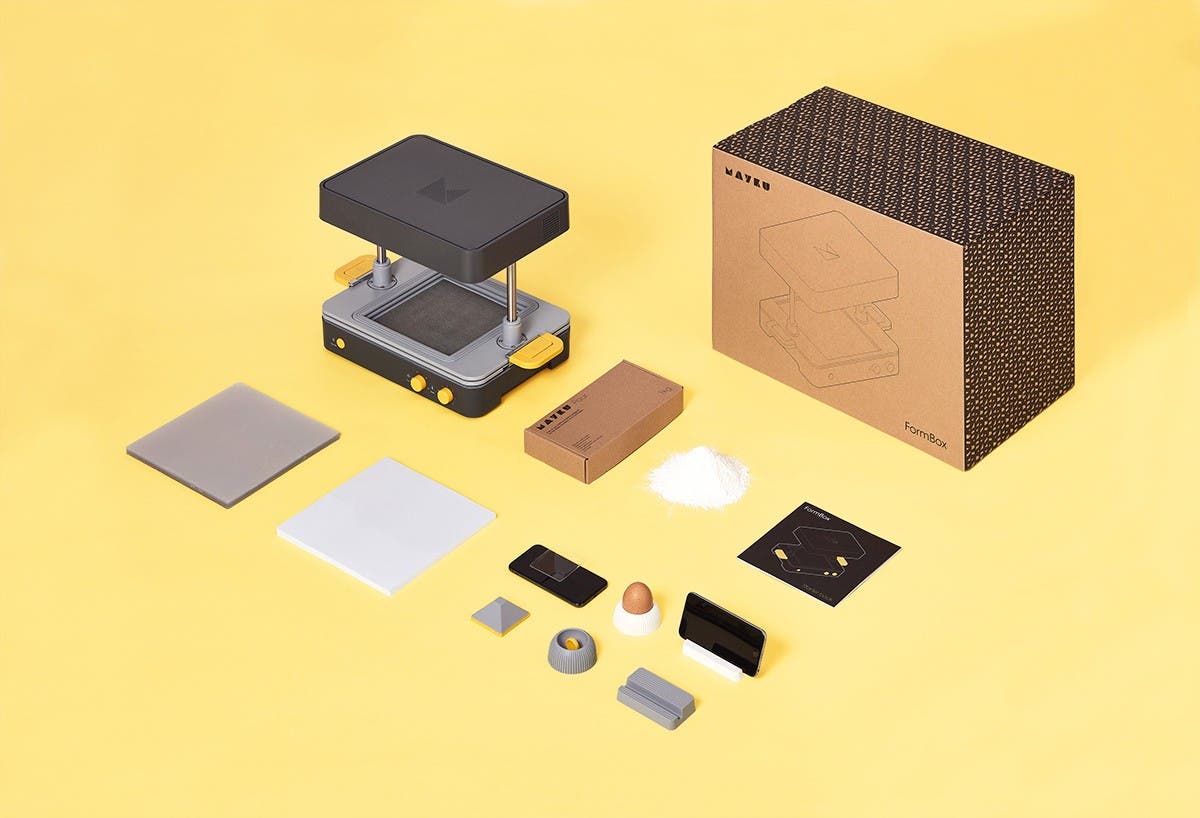 Kohl’s Design It! Lab is a grant-funded space at Milwaukee’s Discovery World Science and Technology Museum. The space is accessed everyday by adults and children alike where fun projects await, like making stuff together, upcycling and discovering new design processes. Ultimately, the lab is all about creativity and helping people bring out their bright spark.

One of the machines in the lab’s arsenal is the Mayku FormBox, which they use to vacuum form moulds which can be used in all sorts of different ways. For instance, the mould can be cut and used as a casing on a model fire engine, or the mould can be filled with putty, plaster, or edibles like chocolate and caramel to create delectable treats. 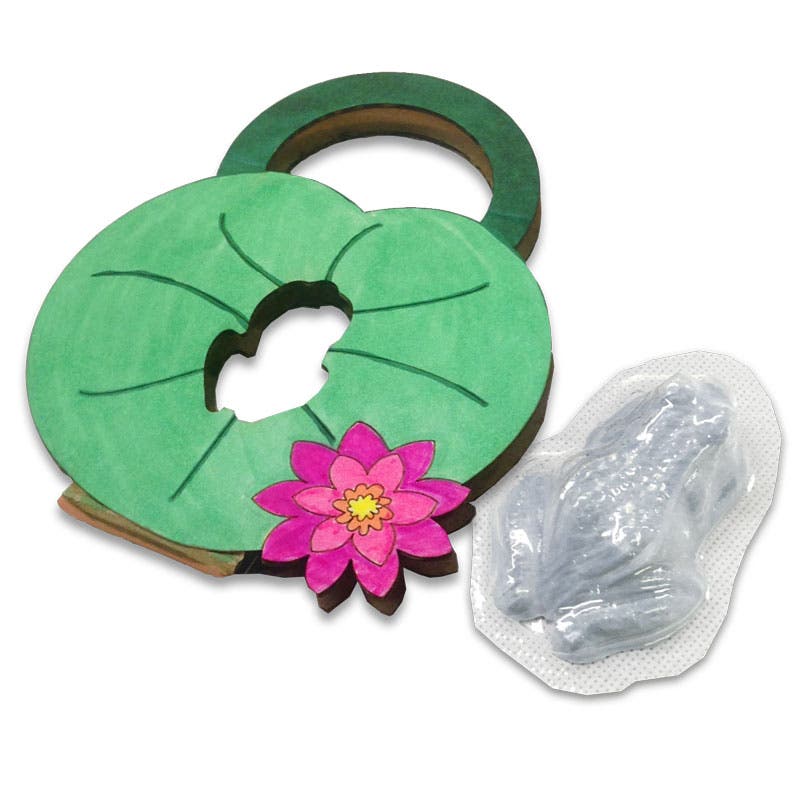 The designers and technicians at Kohl’s Design It! Lab instruct and teach school groups on weekdays and members of the general public on weekends.

All sorts of wild and wacky projects take hold, including one recent project where they vacuum formed a mould of a frozen wood frog: the wood frog doesn’t migrate out of Wisconsin during winter. Instead, it freezes solid in shallow soil. Its bodily fluids freeze solid, but near freezing point, the wood frog’s metabolism creates an anti-freeze which protects the cells. This enables the frog to thaw in spring and spring back to life. Using the FormBox, the team were able to create a model of the frog’s encasing to show why and how it does it.

It isn’t all science and stuff though. The lab does a significant number of workshops covering manufacturing. Toy cars and casings are always being made and modified and improved. When the team found out BMW were using vacuum forming to manufacture bumpers and interior trim inserts for some of their cars, they decided to replicate the manufacturing process on a smaller scale to show how the different components work.

Here’s the models in question: 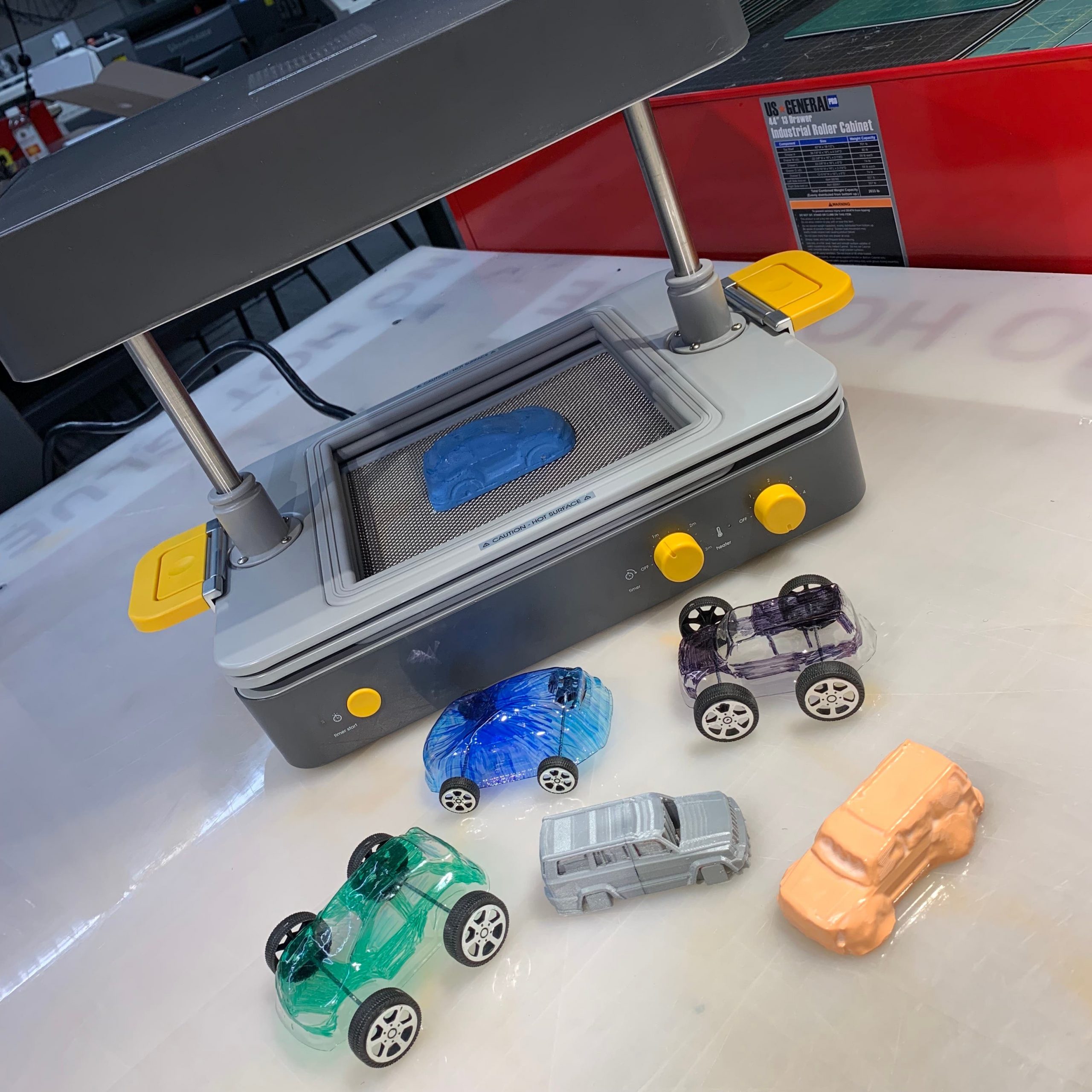 The models in the image above were carved from clay, formed and cast in a resin. The SUV was printed on the lab’s 3D printer. Clay was then used to plug any gaps, and the model was cast in resin. Students from a nearby school then formed the car resin moulds and created space for the wheels.

The lab’s 12 designers have access to more than one FormBox which enables them to vacuum form multiple models very quickly. They also have access to a 3D printer and laser cutters. To create custom moulds, they have a talented team of sculptors and artists – and children and adults also learn tricks of the trade in workshops which are held every week.

Everyone who uses the FormBox is impressed by it, “people get so excited when we have it out and are so surprised by how easy it is to use,” says Meghan Langmeyer, one of the lab’s designers.

In addition to being easy to use, the FormBox is also affordable. Each FormBox costs under £600 and comes with everything needed to get started. A pack of 30 form sheets costs around £30, so you’re looking at £1 per mould. This means you can prototype several variations of a model on the cheap. For forming, the FormBox is compatible with generic PET-G, HIPS, ABS, polystyrene, polycarbonate, polyethylene and acrylic PMMA sheets, but the official FormBox sheets are best.

The team also found the FormBox to be a significant upgrade over the vacuum formers they were previously using, which were donated to them by a local orthodontist. They only had a 5×5 inch build platform, which restricted the type and scale of models they could make. The FormBox has an 8×8 inch build platform which has made the world of difference.

This information was first published on the Mayku website. All images are credit to Mayku. You can find out more about Kohl’s Design It! Lab here. If you enjoyed this case study, check out our previous FormBox one – Making Delectable Dessert Moulds with Mayku and Damien Wager.