The new Blueprinter 3D printer has arrived, and it’s slicker, prettier and greener than ever before.
It can build more, it makes 60% less noise. In fact its noise levels are now on a par with a standard 2D printer. 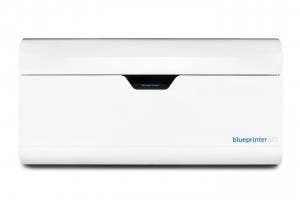 Called the M3, it is an improved addition to the already successful M Series from the Danish company. It is ideal for daily office use. It has a smoother appearance, with less harsh lines; a glossy surface and a clearer display. It is more energy efficient and therefore uses less power. It has no buttons – it is completely controlled from a computer.

The M3’s accuracy and build capability is also improved. It can make many different parts in just one session. These parts can be hugely detailed, and are flexible and easier to handle than previous 3D printers could produce.

If you can’t tell, we’re just a little bit excited to have it available from GoPrint3D – why not watch the video. For more information, including specifications, please check out our Blueprinter page.