There isn’t much riding on Star Wars: The Force Awakens – just the $4.05 billion Disney paid George Lucas and Lucasfilm Ltd for the rights to the franchise, and the expectations of the millions of Star Wars super-fans they inherited. No pressure, then.

But seriously, there hasn’t been as much hype surrounding a film since, well, ever. Part of the hype is of course built up from the nostalgia of those trying to recapture their childhood, but mostly, it’s built up from the fact that the latest episode simply can’t be any worse than Star Wars Episodes I to III, because it’s being directed by J.J. Abrams, the man who did such an incredible job with Star Trek and Star Trek Into Darkness. And to top it all off, we still haven’t seen Luke Skywalker in any trailer or on any poster – we have Abrams’ genius mystery box technique to thank for that – fuelling rumours that Skywalker might just be Kylo Ren. Yeah, we’ll let you stew on that thought for a few moments…

Of course, all this talk of Star Wars focuses on the present. Let’s not forget that it’s not just the movies that have grown its fan base, with memorabilia, trade shows and even a 3D CGI television series called Star Wars Rebels keeping it relevant in a world that hasn’t had a franchise of this kind since the first film was released.

If you’re as excited for Star Wars: The Force Awakens as we are, and you too have a passion for 3D printing, then you’ll be excited to learn that there are a wide range of different Star Wars 3D printable models you can make with your 3D printer at home. We’ve been keeping tabs on this movement for a while now, and we’ve found some brilliant 3D blueprints that are open source for you to use. So let’s kick things off with the most awesome of them all: 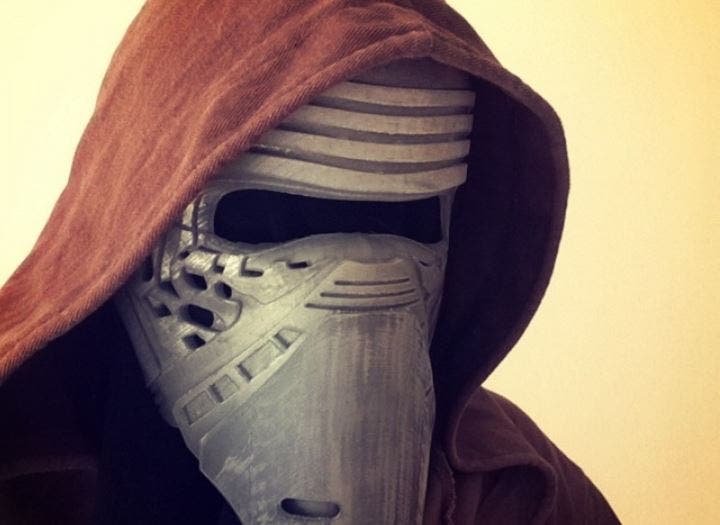 This Kylo Ren helmet is certified 100% awesome. The blueprint for it is available for free at My Mini Factory right now. The designer, Luke Daley, spent five weeks and 100+ hours just designing the helmet in the 3D CAD design software Solidworks, and the result of all his efforts really paid off. The helmet looks absolutely amazing. Fans can print an exact replica of Daley’s design or tweak it as much as they like. However be warned – the design is complex and you will need an FDM 3D printer with a large build volume, like the Makerbot Replicator Desktop or better yet, the Ultimaker 2 Extended.

If you want something a little more raw, check out this Kylo Ren 3D blueprint designed by Stefanos Anagnostopoulos. 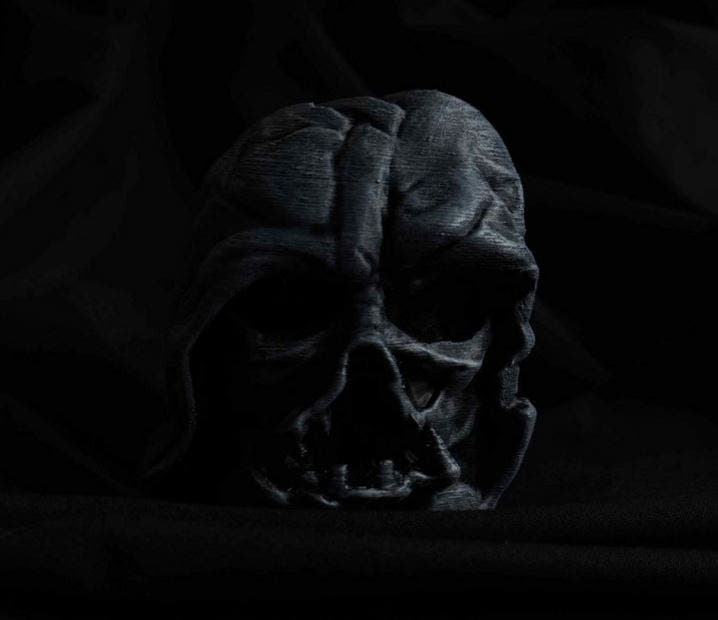 “Have you felt it Lord Vader? There has been an awakening. I will finish what you started…” Perhaps the biggest moment of any of the trailers for Star Wars: The Force Awakens has been Kylo Ren holding the eerie-looking melted mask of Darth Vader, and now you can print your very own thanks to designer Francesco Orrù who has made his 3D printing blueprint available to all. The dimensions are 900mm x 100mm x 900mm, and users have had great success with the Makerbot Replicator 2 and XYZ DaVinci 1.0 3D printers. Get your blueprints at My Mini Factory. 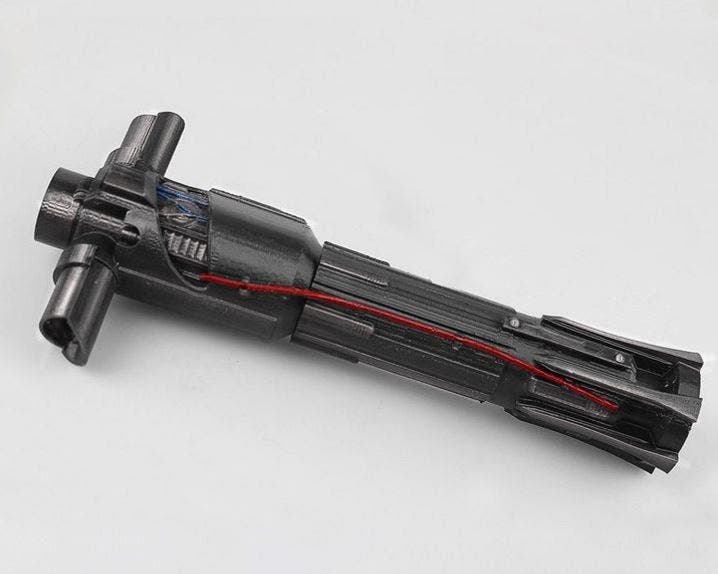 Need a lightsaber to go with your Kylo Ren helmet? Then check out this Kylo Ren Lightsaber by Cemal Cetinkaya. This is a complex model and Cetinkaya reckons it’ll take 600-660 minutes to make. He recommends a 0.15 mm layer height and 20% infill density for best results, and importantly, the main parts do not need support. It looks superb, and until we can create real lightsabers, it’s the next best thing. Get the blueprints from this page at My Mini Factory. 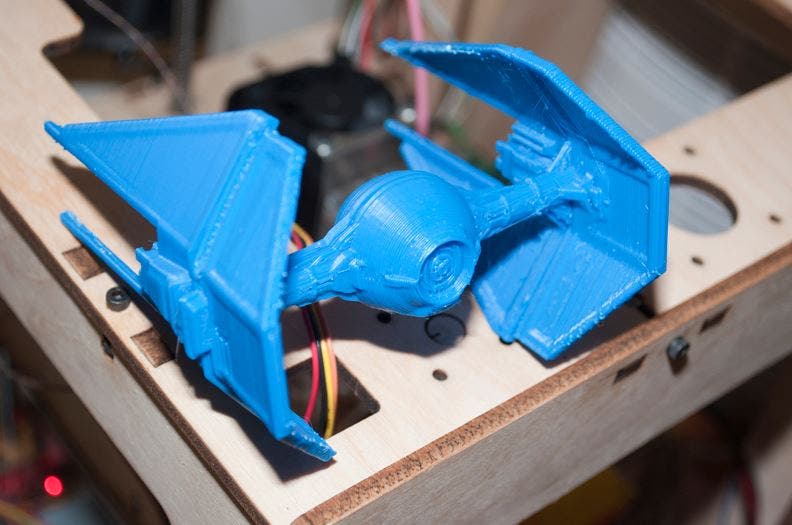 Designer Drayde has done Star Wars fans proud with this Tie Interceptor blueprint, which is available in 2 versions: one as a whole piece for 3D printers with a large build volume, and one as two pieces for smaller machines. You can get your blueprint at this page on Makerbot’s Thingiverse website. We reckon it’ll look best in stealth black! 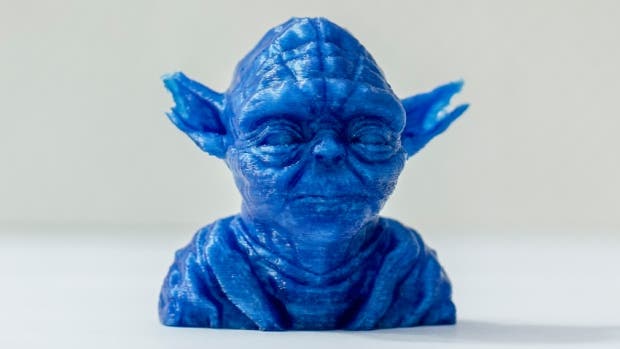 This blueprint is perfect for anyone with a smaller 3D printer. Quite simply, it’s a bust of Yoda! The original author of this 3D model is Adam Beamish but Thingiverse user MustangDave refined it so it’s fully 3D printable. A lot of work went into this process, according to Dave, and you can see that, what with the level of detail Yoda’s face has. Download the files you need at this page on Thingiverse. Awesome, your print will be. 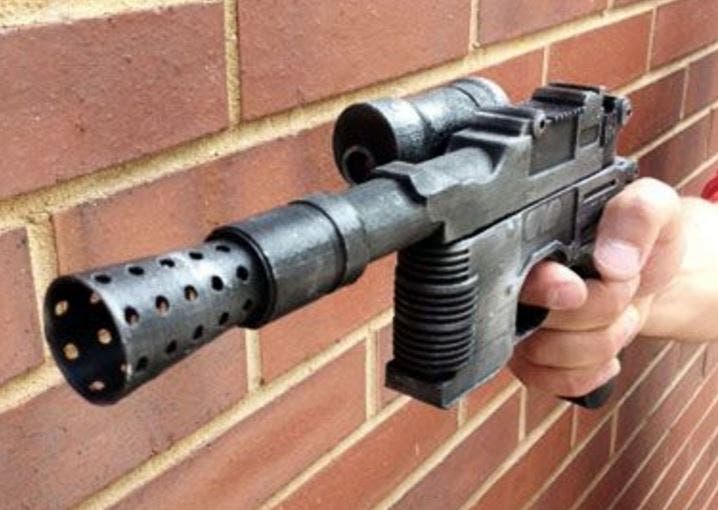 We apologise for the hazy image – it really is the best we could find, and it does this model no justice at all. The Han Solo Blaster or DL-44 pictured above was designed by Elliott Viles and the 3D printing blueprint is available for free from My Mini Factory. The DL-44 was a powerful blaster pistol from the time of the Galactic Civil War. It made an appearance in the first three Star Wars films. Any 3D printer will do for this model, because each part is printed separately, and each part requires only a 200-micron definition. 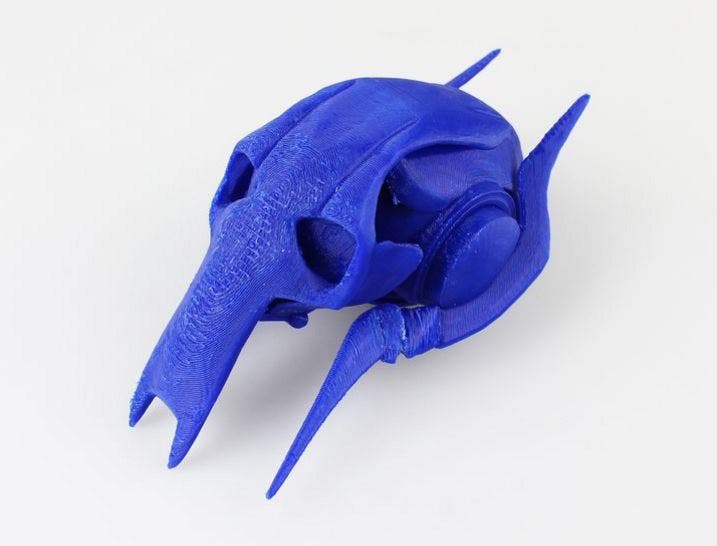 General Grievous gets a bad rep. We thought he was a pretty cool villain in Star Wars: Clone Wars and Star Wars: Revenge of the Sith and as the Supreme Commander of the Confederacy of Independent Systems during the Clone Wars, he’s definitely as tough as they come. So we were delighted to discover that his head has been designed for 3D printing by designer Roman Amstutz, who was also kind enough to publish the blueprints on My Mini Factory. Cheers Roman! Get your blueprints here. 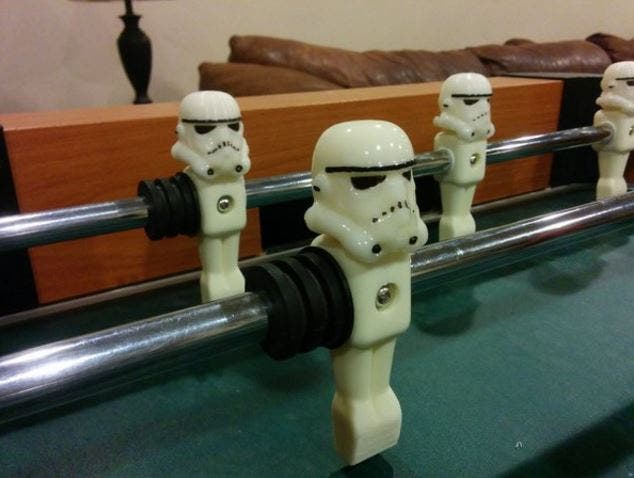 We’ll finish off our list with something nice and small – Stormtrooper foosball heads! Firmware engineer and YouMagazine user excite decided enough was enough with his boring foosball models, and with Star Wars: The Force Awakens on the horizon, he designed a 3D blueprint for some snap on Stormtrooper heads to liven things up a little. Using Christopher Zuk’s Stormtrooper head design, excite came up with some awesome 3D blueprints that can be downloaded for free from YouMagazine. Get yours here. You could even modify the blueprints to create pencil-toppers if you wanted!

A last word on printing with open source material

As always, please make sure that you study and understand the usage rights that the creators of these blueprints specify.

Happy 3D printing, and may the Force be with you.