Additive-X is proud to be the sponsor of SBA Avidity Racing who have been crowned the UK 2021 Champions of the Formula 1 in Schools competition. F1 in Schools is the world’s largest STEM competition, with over hundreds of students competing all around the world.

Missy McArdle, 17, Libby Atkin, 16 and Alex Jenkin, 17, created a miniature racing car powered by compressed air. Facing 15 other schools, they came first for their engineering and design excellence. Technical, financial and marketing presentations were also assessed, with the Scarborough team coming out on top.

The car sped along a 20-metre track at up to 50mph, showing more incredible speed and movement quality than other cars in the competition.

Additive-X supported the team with 3D printing the prototypes and finished parts for their miniature racing car. The students will now compete at the 2022 world finals of the Formula 1 in Schools competition. 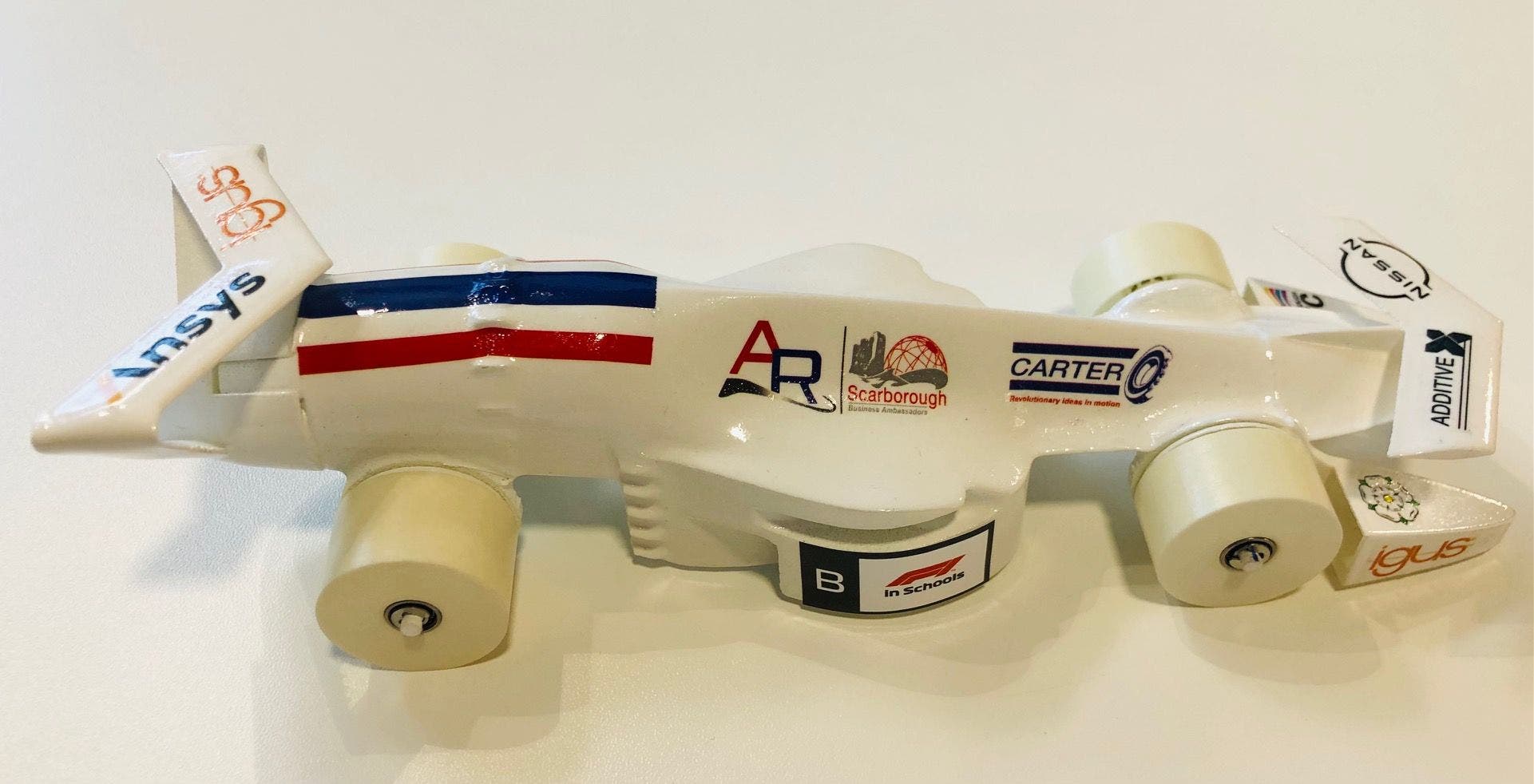 The team principal, Missy, reached the world finals in Abu Dhabi two years ago, so this will be another round of finals.

“We build and race our very own 1:20 scale F1 car, powered by a CO2 cartridge. The cars race down 20-meter track and travel at speeds of around 50mph. The team started F1 in Schools back in September of 2018, that very season we made it to the world finals out in Abu Dhabi representing England and placing 19th overall.”

“In the 2021 season the team is competing the professional class, the top of the competition. The cars take longer to design, test, and make due to the high quality of competition. The team has spent more hours than we would like to count on working to be a top contender in this season’s competition. We design our car using Solidworks, our cars take hundreds of hours to finish due to our handwork and strive for success. The front and rear wings are both designed on Solidworks then 3D printed.”

“The new success hasn’t sunk in yet. We put in hundreds of hours, staying late after school for many evenings, but it was all worth it,” said Missy.

“We need to keep stepping it up for the world finals. We’ve spotted some areas of improvement for our car and how we want to re-design it and go again.”

In addition to the 2022 world finals, the students have secured work placements at Alpine F1 in Oxfordshire and UCL (University College London), with Mechanical Engineering bursaries to the value of £5,000.

Additive X’s role in the team’s triumph was assisting the team with 3D printing technology, design and part fabrication. We recommended technologies and machines for what they wanted to achieve and helped them make the most of them.

We wish SBA Avidity Racing the best of luck in future competitions. You can find out more about their triumph here. Keep up with the team on the road to the world finals on their Instagram @sba_avidityracing!