Skateboarding isn’t everyone’s cup of tea, but there’s no denying the skill it takes to pull off a kick flip, let alone a nollie laser flip. In fact, many beginners will take weeks to master an ollie. So, the struggle is real.

If you’re more of a sit back and relax kind of person, we get that. It’s much easier to watch other people’s skateboarding exploits than attempt them yourself. And that’s exactly why there are thousands of YouTube channels out there dedicated to teaching techniques and showing off the latest jaw-dropping moves.

One person who loves skateboarding is Formlabs’ videographer, Josh. Josh enjoys time on the parks and he also enjoys skateboarding on the streets, and he’s been making skateboarding videos for a while. But being a Formlabs’ team member, it didn’t take long for 3D printing and skateboarding to come together in the form of a 3D printed GoPro Tough Mount!

Formlabs decided to print a new mount for Josh to help him record his skateboarding exploits – and to show off the durability of parts printed using the Form 2 3D printer. Here’s the mount fresh from the print bed: 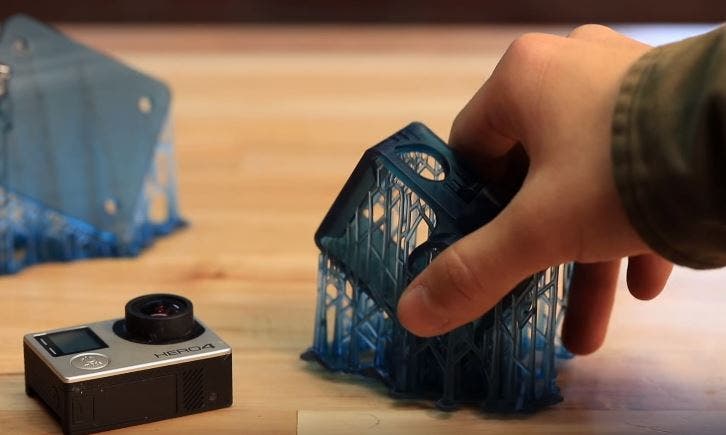 And here’s the unfinished mount with the GoPro inserted: 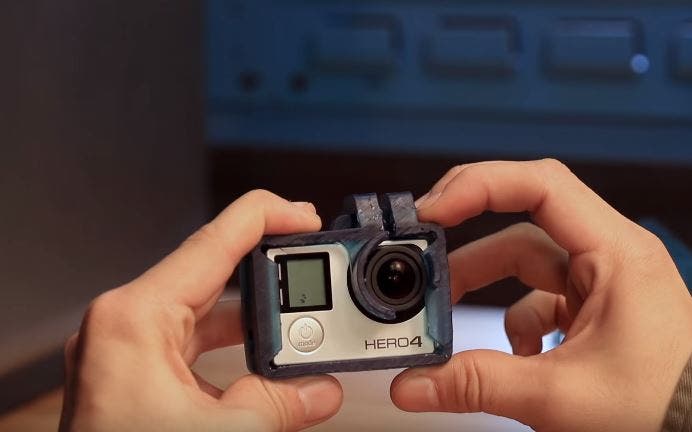 The mount was printed using Formlabs Tough Resin. Tough Resin is extremely resilient to heavy vibrations and impacts. It also deforms before it breaks, allowing you to see exactly which points of a print fail, and it is the perfect material for a mount because it handles stress while being flexible enough to accept the GoPro Hero 3 and GoPro Hero 4. It also looks really cool!

Of course, things didn’t start out well! The first prototype snapped in use and the second prototype didn’t have a perfect finish. It took a few attempts to get right (six, to be exact), but the final end-use part looks like something a retailer would be happy to display in their store – and something Formlabs can be proud of.

The mount has three distinct bolted parts (again, this is another benefit of Tough Resin – its ability to withstand torques) which are: 1) A deck mount for fixing the GoPro to the deck, 2) A beefy hinge to stand up to lots of shock, and 3) A lens protector to guard the GoPro’s lens from impact and flying debris damage. Here’s how the mount’s pieces all tie together: 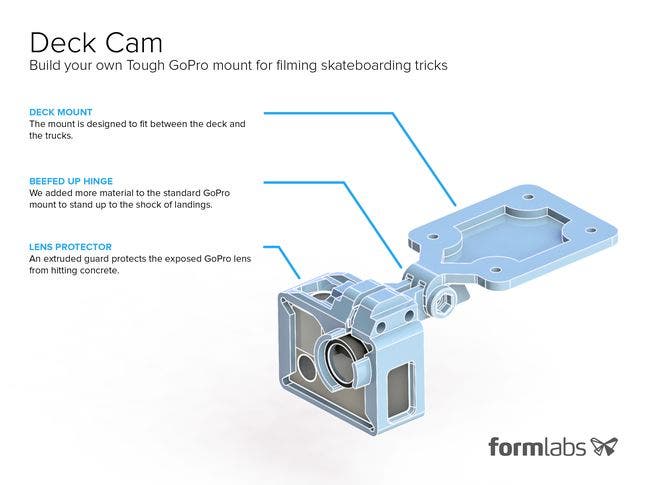 And here’s a video of the mount being created with the Formlabs Form 2, and being tested by Josh himself:

How cool is that!?

To create your own skateboarding mount, head on over to our source (below) where you’ll find detailed instructions on how to do it.