FlashForge isn’t a brand everybody in the 3D printing world has heard of, but having been founded in 2011 and having brought to market a range of exciting and well-made 3D printers over the last few years, they have already carved a name out for themselves, and especially so in the education sector, where ease-of-use and safety are of paramount importance.

We are big fans of FlashForge 3D printers, and having used them extensively over the last 6 months to test their performance and features, we can wholeheartedly recommend them to educational institutions. Below, you will find everything you need to know about two key 3D printers FlashForge has brought to market recently; the FlashForge Finder, and the Creator Pro. 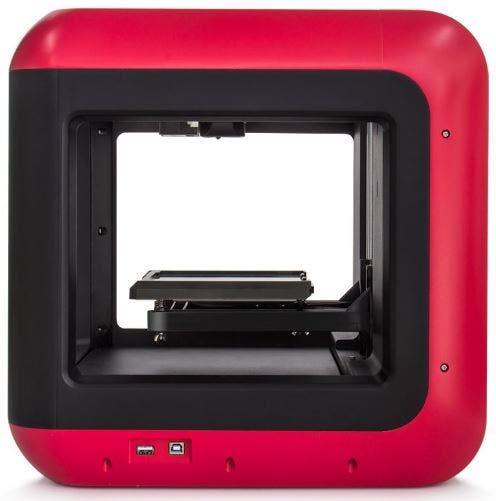 The FlashForge Finder is the most affordable 3D printer FlashForge makes, and it is also one of the cheapest on the market. It’s great value for money; it comes pre-built, is loaded with useful features and has a generous 140 L X 140 W X 140 H mm build volume, giving your ideas room to grow.

Being a Fused Filament Fabrication 3D printer, the FlashForge Finder needs to be loaded with a filament which it then extrudes layer-by-layer until a model is created. The Finder prints with 1.75mm PLA exclusively, making it an ideal printer for educational environments where the high operating temperature of an ABS printer could be deemed a risk.

Further bolstering the Finder’s suitability for educators is the low operating noise of the machine, which stands at 50Db. That’s around the same level of noise as a quiet conversation, so educators can run the machine without it disturbing class. The Finder also looks the part, with a bright red shell and a 3.5” touchscreen built into the top section of the printer, through which you can control the printer’s various settings.

Those of you with concerns surrounding print quality and consistency from the Finder given its price can breathe a sigh of relief, because we have tested it extensively with outstanding results. We have found the reproduction of CAD models to be excellent, thanks to a strong positioning precision and the ability to print at 100-500 microns. In a nutshell, the FlashForge Finder can capture fine detail well, although it can’t capture the ultra-fine detail that more expensive 3D printers can. For that, you’ll need to spend more.

Overall, the FlashForge Finder is an outstanding entry-level 3D printer that makes a compelling case for itself: For the price, no other 3D printer on the market offers educators so much for so little. It’s well-worth the money. But, for a little more, you could have a bigger and faster machine from the same brand, in the FlashForge Creator Pro. 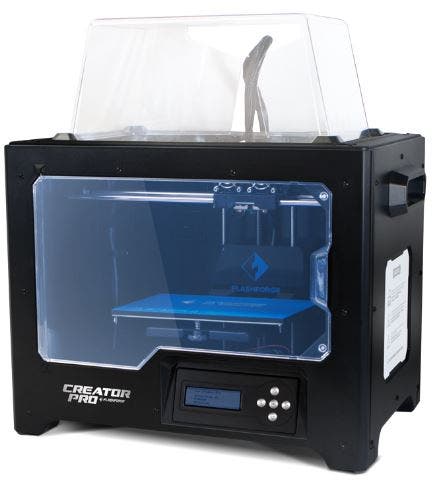 The FlashForge Creator Pro sits slap bang in the middle of the FlashForge 3D printer range, sitting above the Finder and below the Guider. The Creator Pro offers educators even more than the Finder, with support for ABS and PLA and other third-party filaments, including ColorFabb filaments such as WoodFill, CopperFill and BrassFill.

The improved material support translates to an even greater number of educational opportunities. With ColorFabb WoodFill, students can 3D print models that look, smell and feel like real wood, and there’s even more exciting filaments to choose from, such as CopperFill, BrassFill and BambooFill (which look like real copper, brass and bamboo).

The Creator Pro also also boasts a larger 227 L X 148 W X 150 H mm build volume, and it has two extruders as opposed to the Finder’s one extruder. That dual-extruder setup means faster print speeds, and it is the main reason why the Creator Pro supports more materials. The Creator Pro also has steel nozzles.

Our favourite feature of the Creator Pro though is how easy it is to use. It has a near 180-degree opening front panel, so that you can easily manoeuvre your models from the print bed, and the levelling knobs are nice and big. The control interface has also been tilted 45°, so you can operate the machine standing up, and external handles have been built into the shell so that you can move it around the classroom easily.

Then, we have software support. Both the FlashForge Finder and Creator Pro are open-source derived machines, so they support all third-party software. This gives you – as an educator – complete control over the software that students will interact with. There are many excellent (and free) software options out there, and FlashForge also ships their printers with FlashPrint, an intuitive software that automatically selects the best print settings for you, or you can adjust every parameter for the best results. FlashPrint also has a neat feature where you can see a layer-by-layer visualisation of a model when sliced.