CES started today and already we’ve had a number of big 3D manufacturers make various announcements, here’s a quick summary for those of you who don’t have time to spend all day reading press releases! 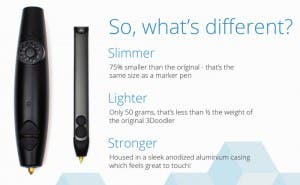 3Doodler Announced 3Doodler 2.0
3Doodler has announced the 3Doodler 2.0, which has a sleaker design and a new improved nozzle, as well as some improvements in airflow, power usage and temperature control which will make a huge difference to this wonderfully addictive product. Now available to pre-order on Kickstarter.

ROBO 3D Unveils Spectrom – Full Colour Extrusion
ROBO 3D has unveiled full colour extrusion technology which they are intending to add to their range of 3D printers. At the moment it looks as though it can only operate with 64 colours, but they are looking to expand to 30K soon. Again, eager to see what this is like.

Formlabs Release New Version of Preform Halves Print Times
Formlabs have announced their new version of Preform which allows a setting of 200 microns (yet still looks amazing), enabling you to print twice as fast. See the video below: 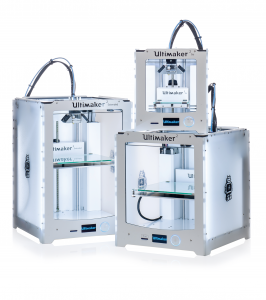 3D Systems Showcases CocoJet Chocolate
Another Chocolate 3D printer, this time made by 3D systems in conjunction with The Hershey Company. It’ll be interesting to see how this performs. Feel free to send me some samples 3D Systems!

Voxel8 – The First Electronics 3D Printer
This printer uses PLA and a silver ink which allows it to print off circuit boards. They used an example quadcopter at CES. It’ll be interesting to see how this does.