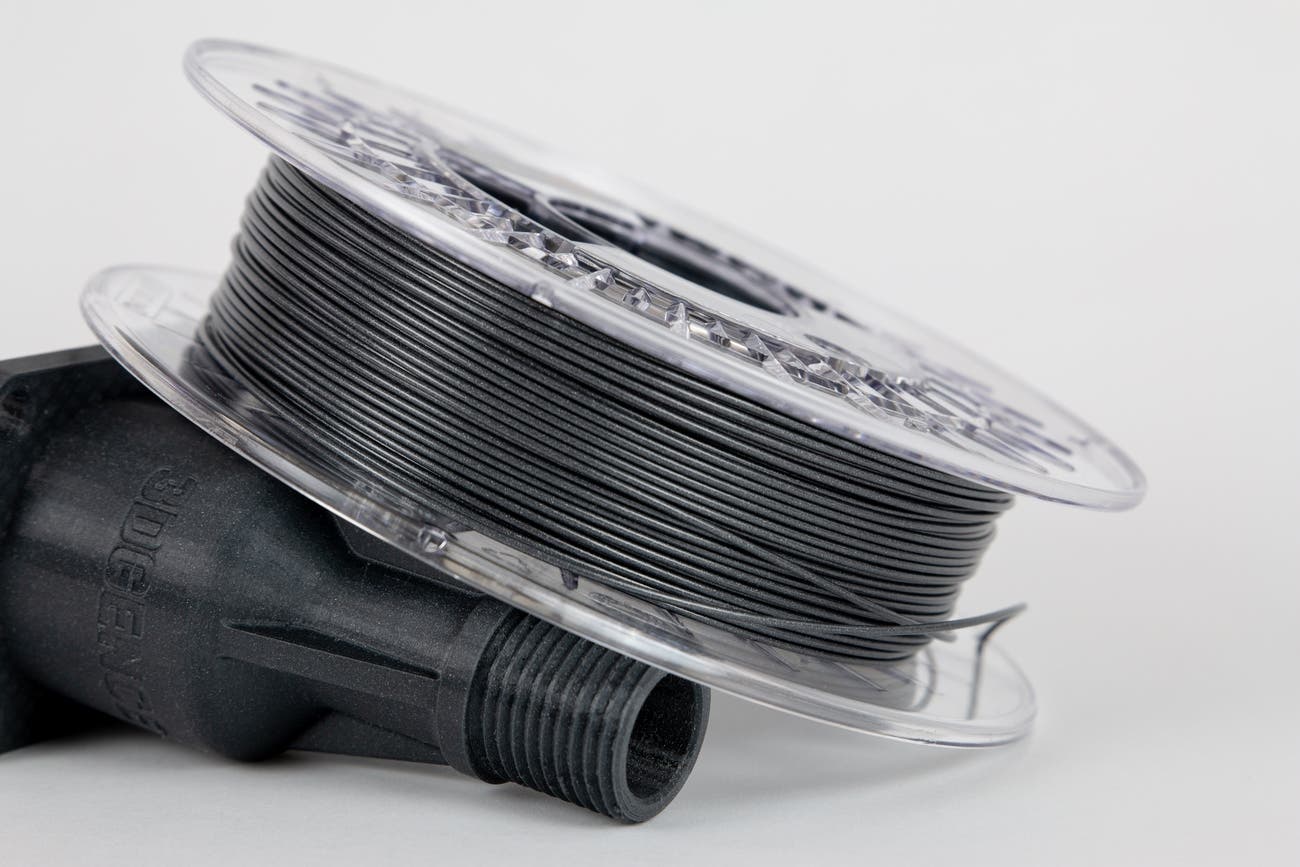 Polish 3D printer manufacturer 3DGence has enhanced material support for the INDUSTRY F340 with the official introduction of Flexfill 98A, made by Fillamentum. This is the first flexible 3D printing filament to be supported by the F340.

Flexfill 98A is a semi-flexible filament with high hardness. 98A refers to the material’s shore hardness, which is the same as hard rubber. That’s the same material used to make rollerblade wheels and durable, shock-resistant electrical housings.

Other properties include high abrasion resistance, toughness, and chemical resistance. It has a certain elasticity but is not stretchable, unless printed thin. It’s highly flexible and perfectly suited to 3D printing dynamically stressed parts, such as sealings.

Potential applications include manufacturing housings and casings, electrical insulation, sealings and parts that require frequent bending, and handles and grips.

“Our customers increasingly use flexible materials in their work, that is why we constantly meet their needs. Flexfill 98A is characterized by increased high abrasion resistance and tensile strength,” comments Mikołaj Skorupa, 3D Printing Application Engineer, 3DGence.

“Therefore, the material is suitable for printing dynamically loaded parts, e.g. seals or parts that require frequent bending. Printouts made with Flexfill 98A could be supported with the ESM-10 soluble material, which can be washed out. This enables us to obtain even the most complex geometries.” 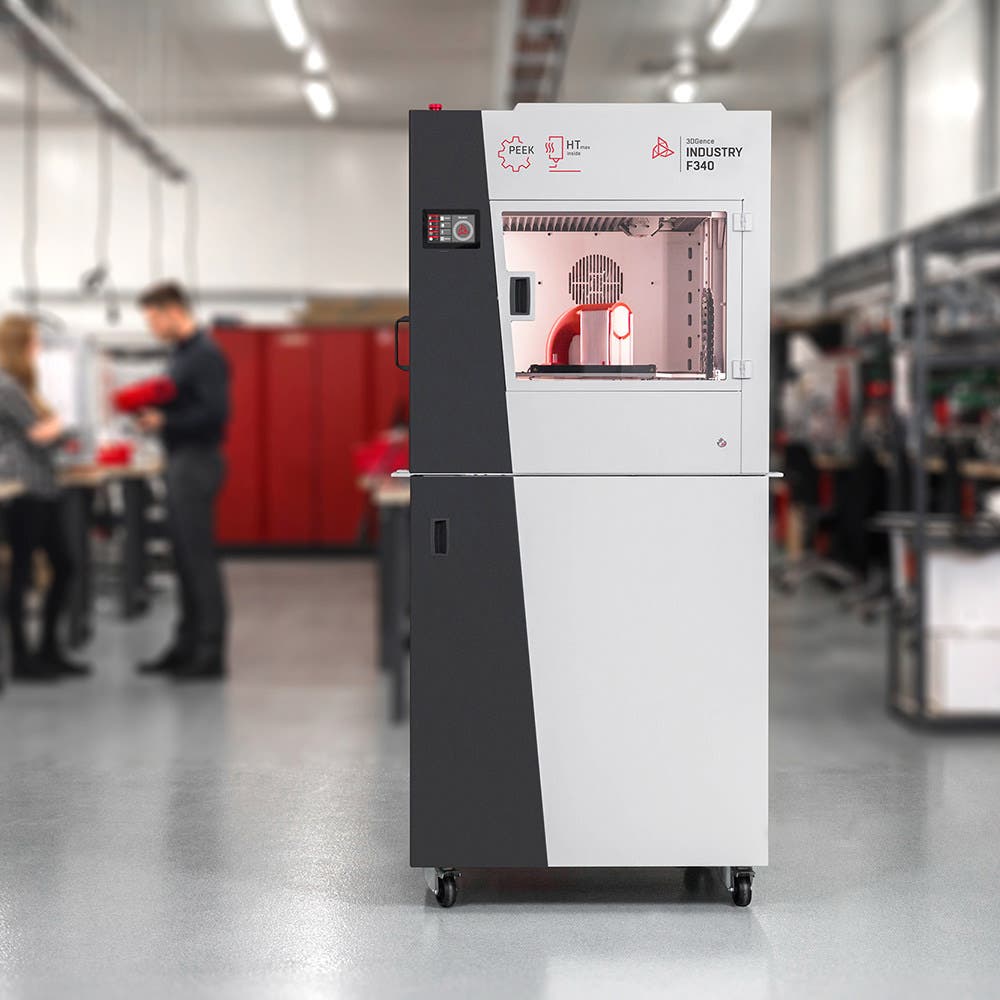 It achieves outstanding accuracy, and repeatability, with industrial-grade mechatronics and High Flow (HF) printing modules. These modules can be swapped out and serve different temperature ranges to suit different applications.

Last year, 3DGence launched the Module HF, which is engineered to print abrasive materials and composites like carbon fibre and fibreglass. It’s set up out of the box to print PA-CF and PA-GF, two reinforced materials. Other modules include the Module PRO, Module HT and Module HTMax, which serve high-temp and tough-to-print materials like PEEK.

Existing owners of the INDUSTRY F340 can print Flexfill 98 with the Module PRO. The material has a recommended print temperature of 220-240°C. The datasheet for 98A can be found here. Here it is as an image: 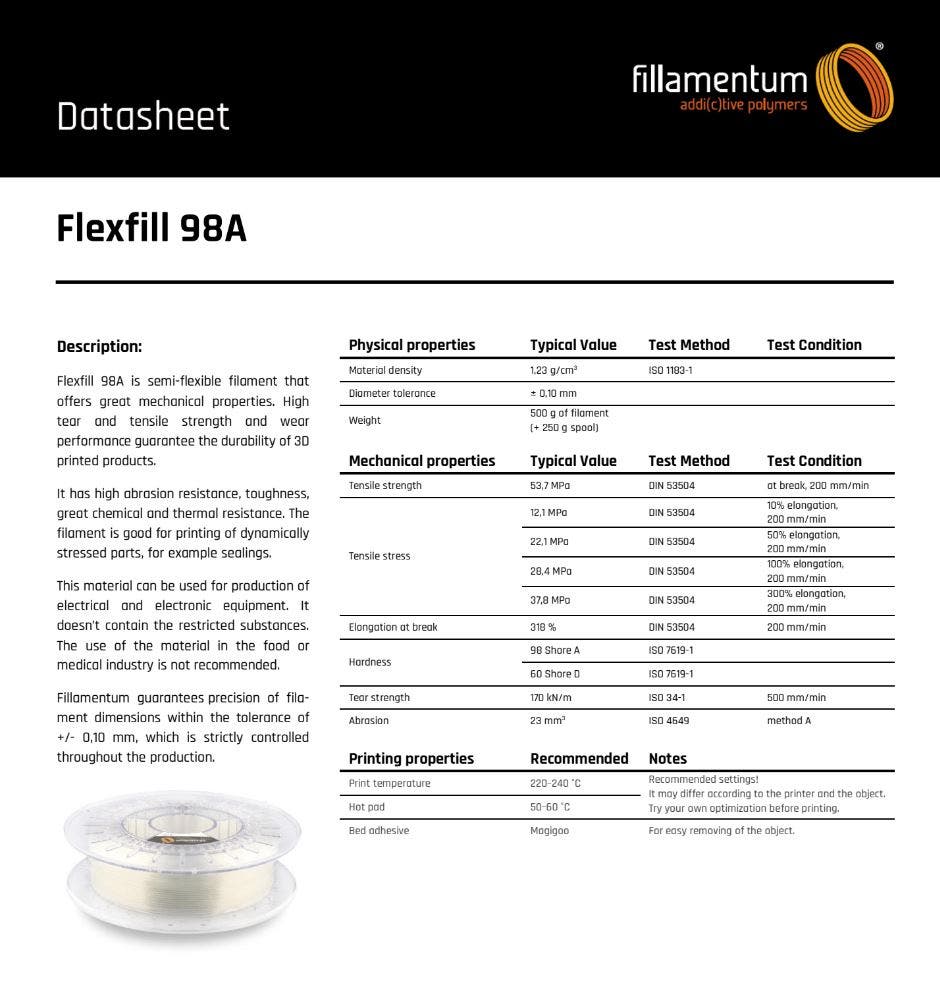 Because the F340 is aimed towards industrial production, from prototyping to making end-use parts, it has a suitably large build volume of 260 x 300 x 340 mm.

Benefits of the machine include very low warping, because of its enclosed chamber, an air filtration system which removes odours and some particulates, and automatic material recognition thanks to an NFC reader. This automatically recognises loaded materials and creates the correct preset, saving time and ensuring high-quality prints.

It scratches the itch for production managers who do not want several machines, which used to be necessary because 3D printers would only print a narrow range of materials. The F340 is a more capable breed of machine, capable of taking the space of multiple lesser machines.

“There are a lot of 3D printers on the market today, which are compatible with a very narrow range of materials, it is associated with the need to have several different devices,” comments export manager Dominik Fitowski, “3DGence INDUSTRY F340 is the exception in the industrial 3D printers segment. It has been equipped with a modular system, which is a more practical and more cost-effective solution.”

With the introduction of Flexfill 98A, the potential use cases for the INDUSTRY F340 have been enhanced even further. For semi-flexible parts and electrical insulating housings, it’s one of the best options out there across any range of materials.

This story was originally published by 3DGence here. Click here to find out more about the 3DGence INDUSTRY F340. We are an authorised 3DGence reseller in the United Kingdom.