3D printing is emerging to become the talk of the town and has come a long way from the days when no industry would desire to dip its finger into this technology as it makes its way into the automotive industry. 3D printed car models are undoubtedly a far newer technology than other manufacturing technologies like machining and moulding. 3D printers have started to change the course of action in many industries, including the automotive industry. 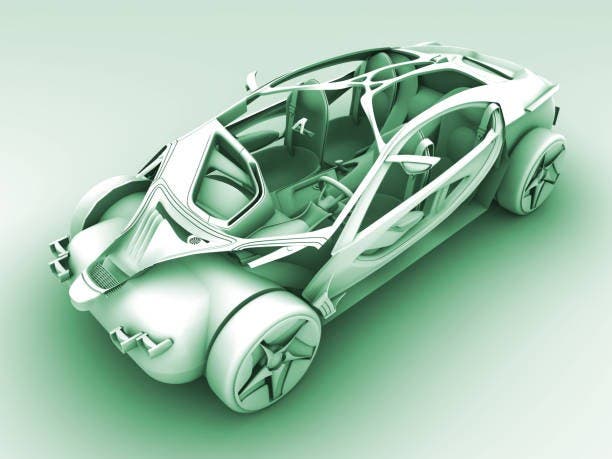 The automotive industry giants Formula 1, Ford, and Porsche have announced the use of car parts 3D printing in their automotive manufacturing ways to amp up their production efficiency and speed by a notch.

The first automotive manufacturing company to jump on the bandwagon of 3D printing in this century was Porsche, with their first ever complete electric drive unit housing printed with the 3D printing technology.

In the first stages of 3D printing car parts, this part, like the prototyping and gearbox and engine containment, faced no difficulties in passing the stress and quality tests with flying colours.

On the other hand, as much as 3D printing was swift for Porsche, it was also beneficial because of the manufacturing of a lightweight automotive part with increased stiffness in immensely stressed areas.

Hence, according to Falik Heilifort, the project manager of the PAD department at Porsche:

“The lightweight manufacturing for highly stressed areas is further proof of the fact that 3D printing is also beneficial for immensely stressed and larger automotive components at the same time.”

Overall, the most significant benefit of 3D printing in the automotive industry is the amalgamation of multi-part assemblies into one single piece. 3D printed car models further reduces the extra work put into assimilation and results in an overall final result of housing. Integrated single-piece manufacturing has saved 20 minutes of production time and reduced the process by 40 steps.

As far as Porsche is considered, this isn’t the first and last time the automotive giants have dipped their feet into the technology of 3D printing, but they are also in the process of testing piston 3D printing for their 911 GT2 RS.

Not only Porsche, but now Formula 1 is also looking to dip its feet into 3D printing technology, by exploring a new way of using additive manufacturing to produce automotive parts in Formula 1 cars. While Porsche is focusing on automated 3D printing of its parts by itself, the outlet of Formula 1 focuses on the use of 3D printed moulds inside in manufacturing its engines.

The designers at Formula 1 are testing the creation of engine block mould designs, with the help of hardeners and sand, as a means of additive manufacturing. Those 3D printed moulds are then used by pouring molten metal into them and creating blocks, which is a far more precise process than the conventional process of tooling molds.

This additive manufacturing technique also gives the engineer a free hand to experiment with never-used-before types of hardeners, glues, and sand for the regulation of aluminium cooling inside the mould. Indeed, a 3D printer directly has a significant impact on the final product in the end as well.

Ford Puts Recycled 3D Printing Waste to Use in F-250

After Porsche and Formula 1, the biggest racing organisation internationally, Ford has also adapted the use of 3D printing in its manufacturing processes.

As a matter of fact, Ford is partnering with HP to transform and recycle the 3D printing waste into fuel-line clips, that are moulded by injection for Ford’s truck F-20. HP is partnering with Ford to carry forward its sustainable production initiatives, which is the first of its type in the automotive industry. This collaboration is also focusing on actually producing improved moisture and chemical resistance parts, that are also comparatively cheaper in production and lighter in weight than the traditional fresh material moulded parts.

IAAPS, which is the United Kingdom’s recently established department at Bath University for researching emerging technology in the automotive industry, is in the process of studying and researching different ways of 3D printing. In particular, 3D printed car models that benefit electric vehicle inverter production, as electric vehicles are emerging as the future of the automation industry swiftly.

The team of researchers at IAAPS is currently focused on a project of 3D printing that can be used to select the components for electric vehicle investors. In the event that this research proves successful, additive manufacturing of the components of an EV would help the makers of electric vehicles overcome different difficulties, like reducing electrical noise, better thermal management, and the volume of packaging.

Using 3D printing instead of the 2D inverter designing process will make the process far more efficient and reliable for the makers of electric vehicles. 3D printed inverters for electric vehicles will allow the production of an intricate lattice internal structure that is made with 1mm thick walls inside the colliding plates. This will provide a far more effective cooling solution, compared to the plates that come with machine cooling channels.

Impact of 3D Printing on the Automotive Industry

The use of 3D printed car models in the automation industry could be a bigger game-changer than anyone on the face of the earth has imagined. It can add to worldwide automotive sales by 114 million per year by 2024, according to the Global Automotive Outlook 2017. This is after the fact that this market is extremely railed up because, in terms of entry, only a handful of OEMs have a monopoly over this industry.

However, on the other hand, the automotive parts industry is far more dense and different. It is filled with thousands of small to large-scale players that increase the competition with every passing day. The projections for this market predict a height of about 17 billion USD by the end of the year 2025.

Lastly, Machine Design has predicted 3D printing consumption by the automotive industry to reach the height of 530 million USD by the end of 2021.

Core Application of Additive Manufacturing in the Automotive Industry

● Design and Concept of Communication
The use of smooth, accurate, and highly detailed models produced with 3D printers is extremely rare for the purpose of concept and design communication in the automotive industry. This is because CAD models alone are not effective enough for the definition of problems in the designs. The following models are also commonly used for newly produced models of aerodynamic testing.

● Pre-Production Sampling and Tooling
3D printers are used in the preproduction of tooling and sampling to make thermoforming tools and moulds, along with quick production of fixtures, grips, and jigs. This process allows for inexpensive samples and tool production and eliminates future production losses, when there is a high investment in tooling costs.

● Customised Parts
Additive manufacturing is also commonly used in the automation industry to customise the process of part production to fit different drivers or vehicles.

Advantages of 3D Printing in the Automotive Industry

There are a plethora of advantages of 3D printing for the automotive industry, including the elimination of costly and time-consuming production.

Besides that, in-house 3D production by an automotive company also enables any kind of information leaks or intellectual property infringements because all the production takes place on one site.

Not only that, but 3D printing can increase agility in the manufacturing process by decreasing the turnaround time of all manufacturing stages. In addition, 3D printers in the automotive industry can also push sustainable manufacturing as they minimise material wastage and consumption to a large extent.