For people unfamiliar with 3D printing, otherwise known as additive manufacturing, the sheer thought of being able to print a real, physical object is mind-boggling, yet exciting. But for people who are familiar, the waiting game for already existing technologies to advance, and new technologies to emerge, is a painstaking process. I think I speak for everybody when I say that the end-goal with 3D printing is for the Star Trek replicator to become a thing. Imagine being able to synthesise meals, and some dinner plates to eat them on.

Alas, we’re years away from that. But not in fiction. Hollywood movies have been using 3D printing for years to elaborate on their plots. In this article, we’ll run through some of these films. Apologies in advance for the waves of nostalgia that are about to hit you like a freight train:

The Fifth Element is a great film, and especially so for futurists. It has flying cars, a ridiculous rifle called the ZF-1, and spacecraft. But most interestingly of all, it has a scene featuring bio-printing – and it is this technology which is used to create one of the Supreme Beings of the Universe, LeeLoo (Milla Jovovich).

Here’s the scene we are talking about:

As you can probably see, the technology used to 3D print LeeLoo in The Fifth Element is incredibly advanced. I couldn’t even begin to speculate on the processes and technologies behind it. I mean, for heaven’s sake, whatever that machine is, it appears to be able to 3D print bone in seconds. We’ve a way to go before that happens for real.

We’re sorry to disappointing you, but the film Small Soldiers featured no 3D printed props as far as our research can tell. What it did do, however, was feature 3D printing at the beginning of the film, as the manufacturing process used to make Chip Hazard, the main antagonist of Small Soldiers, and squad leader of The Commando Elite. Aggressive, logical, brutal and a little bit crazy, in the film, Chip Hazard was designed by toy creator Larry Benson (Jay Mohr) and manufactured by military-led company Global Tech Industries, who had just bought out Heartland Toy Company.

Here’s the opening of the film:

And here’s some screen grabs of the moment in question: 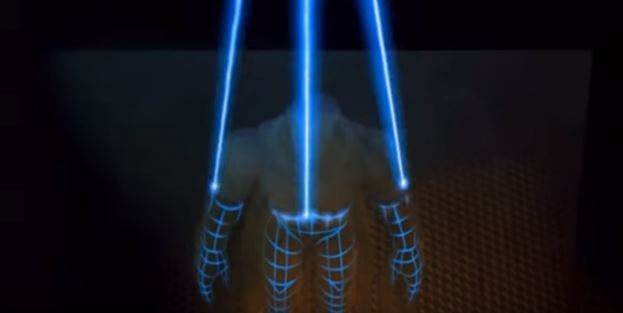 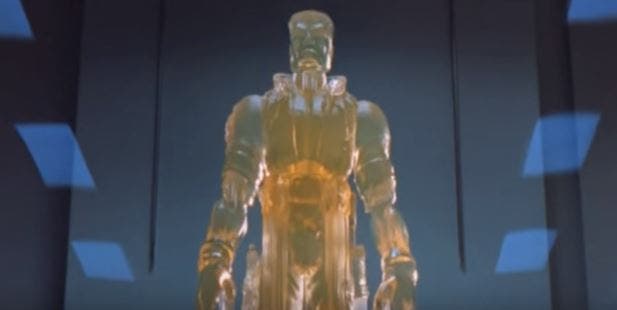 Of course, we’re talking about something fictional here, however based on the video above, we’d have to say that the 3D printing process used to manufacture Chip Hazard in Small Soldiers looks an awful lot like stereolithography (SLA), only the process used is far more advanced – and novel – than any stereolithography 3D printer that’s around today can manage.

“Meet the future of palaeontology; it’s a rapid prototyper. I enter in the scan data from the raptor skull, the computer breaks it down into thousands of slices, and this thing sculpts it. One layer at a time.”

Jurassic Park III has a very interesting scene featuring 3D printing, where Billy Brennan (Alessando Nivola), a young palaeontologist, introduces Dr. Alan Grant (Sam Neil) to his rapid prototyper, with which he 3D prints a raptor resonating chamber. The dialogue of Brennan introducing his prototyper to Dr. Grant can be read above. The words “rapid prototyper”, “scan data”, “slices”, and “layer” will be familiar to anybody who is interested in 3D printing today.

Here’s the scene in the movie I’m talking about:

In a superhero movie cameo, a brand-spanking new Stratasys Dimension Elite 3D printer can be seen. The film in question is Iron Man 2 from 2010. Whilst not running, the Dimension Elite had quite a few seconds of screen time due to Tony Stark spending so much time in his lab. Here’s a picture of what we’re talking about: 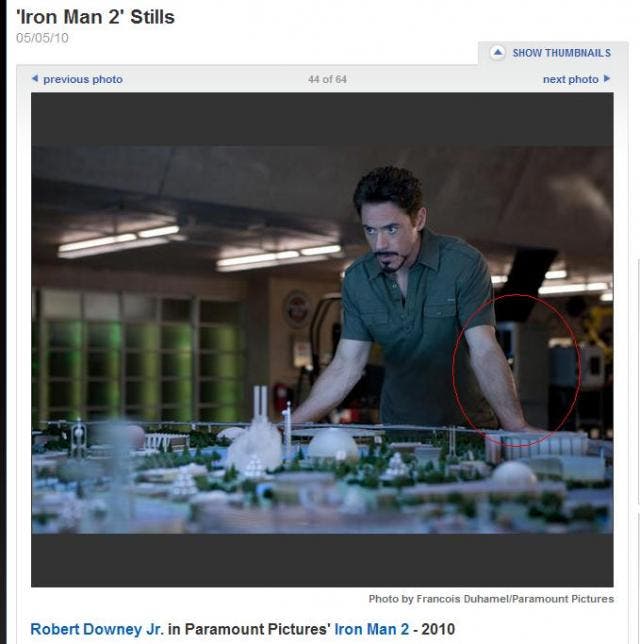 It’s 2028. Alex Murphy – a loving husband, father and regular cop, is injured in the line of duty. To save his life, conglomerate OmniCorp transforms him into RoboCop, a half-man, half-robot mashup. The experiment saves his life, but at what cost? Will Alex ever be able to live a normal life? Or is he now destined to always serve the powers that be? 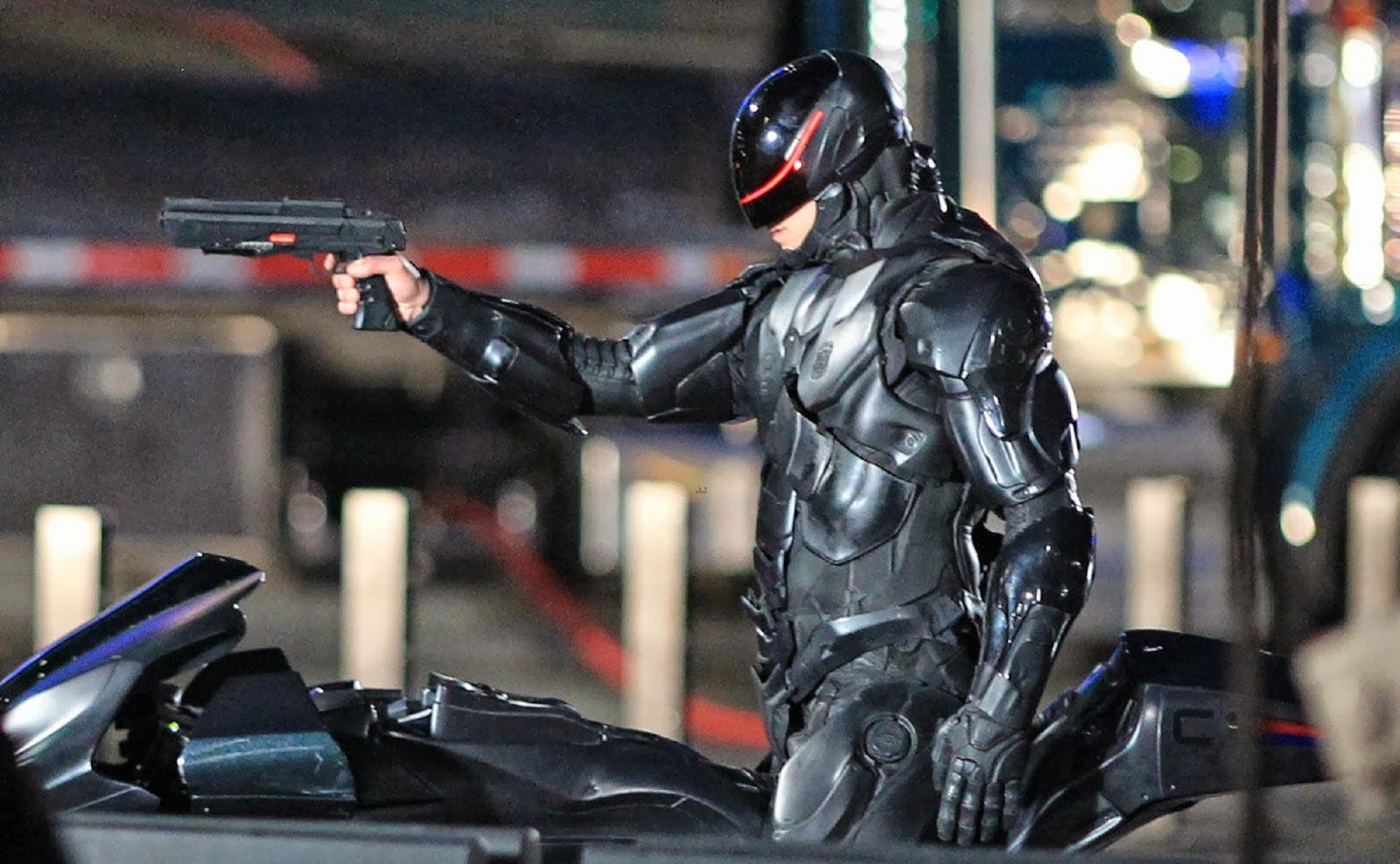 One thing’s for certain – he definitely looks cooler than before. And, you might be surprised to learn that 3D printing was used to create the master mold pattern and final parts for the RoboCop 2014 suit. The 3D printer in question? The Stratasys Objet Connex 3D. Hollywood special effects company Legacy Effects was tasked with creating the suit, and they sometimes used the Stratasys Objet Connex 3D printer to 3D print parts on-site.

Apparently, in some scenes around 90 per cent of the final suit was made from 3D printed parts, which is rather incredible. For example, the visor was entirely 3D printed and so too was the large protective breast plate.

Guardians of the Galaxy was and is a great movie, but did you know that Star-Lord’s helmet (worn by Chris Pratt) was 3D printed? Indeed, the Objet500 Connex 3D printer by Stratasys was used to create numerous helmet prototypes and the final helmet had a 3D printed interior, with 3D printed exterior detailing.

Here’s an image of the helmet in question: 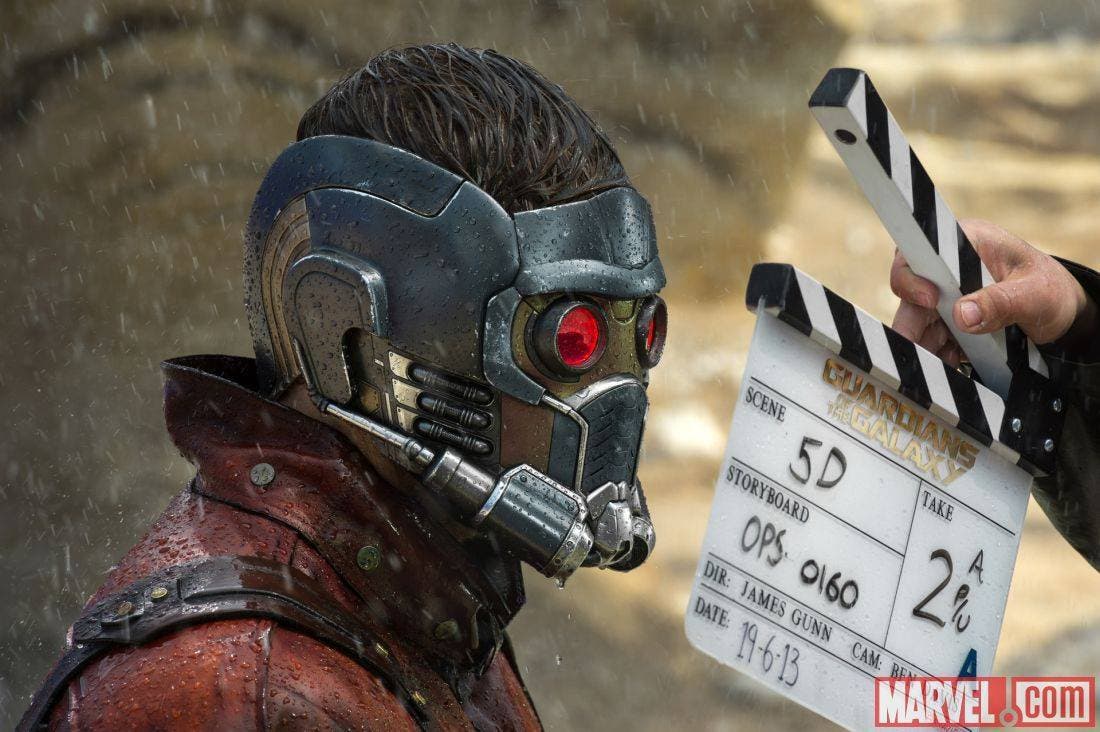 In the 2015 Marvel superhero film Ant-Man, there’s a scene where a Formlabs Form 1+ 3D printer makes a cameo appearance. Blink and you’ll miss it, because its on-screen time is limited to seconds. Here it is: 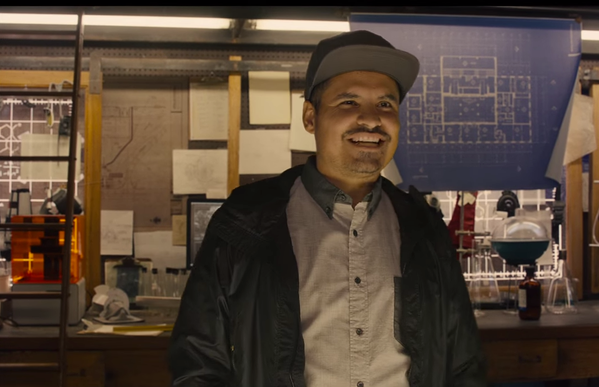 Okay, so it’s time for another prime example of real-world use of 3D printing in films.

Thirty years after the defeat of the Galactic Empire, and ten years after the *ahem* shocker that was Revenge of the Sith, Star Wars returned with a cracker last year. Star Wars: The Force Awakens made over $2 billion worldwide at the Box Office, making it the third-ever film to do so on an initial release. For what it’s worth, the other two were Titanic (1998) and Avatar (2009). It also made over £450,000,000 in Box Office sales across Europe. 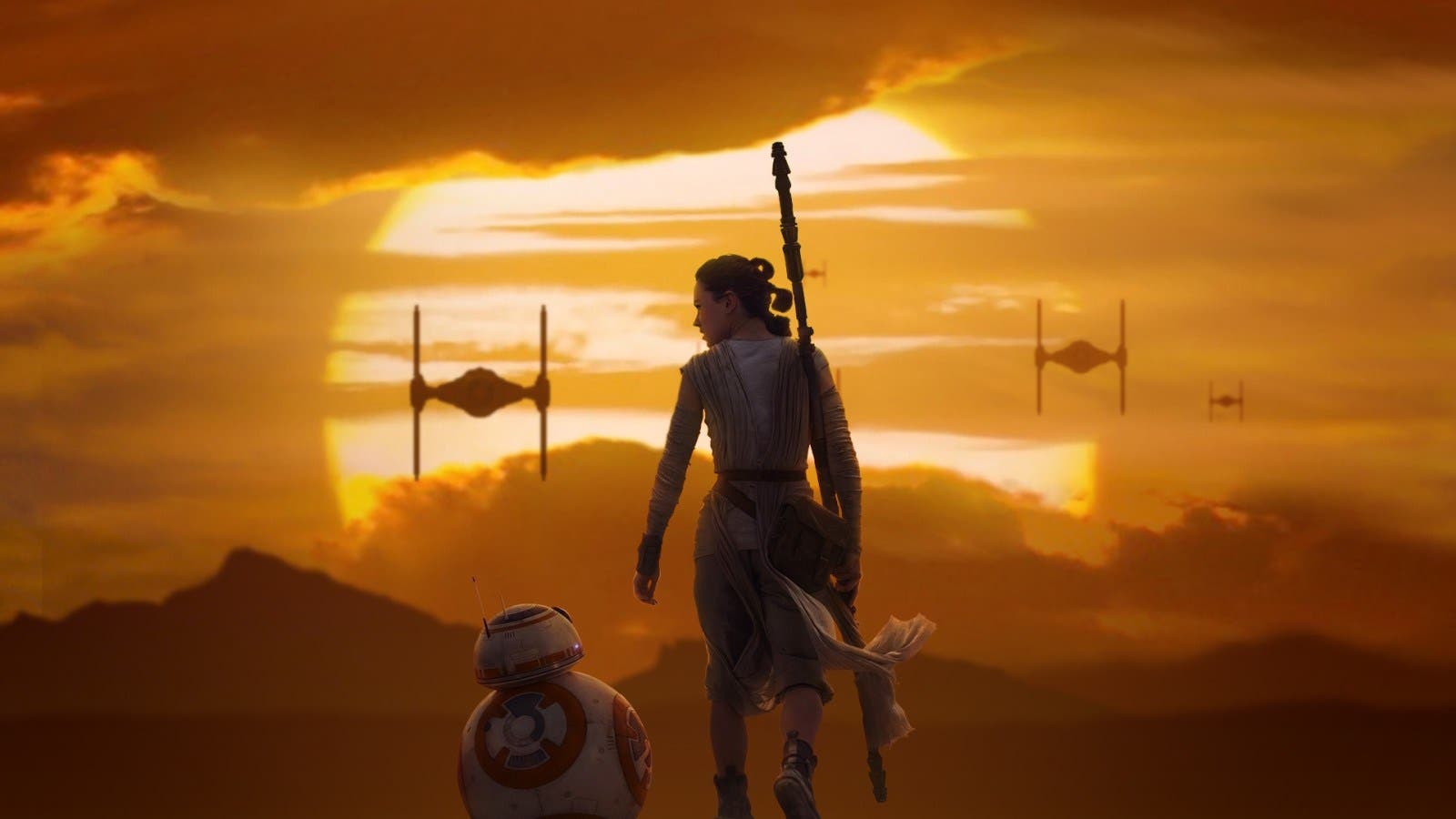 So, Star Wars: The Force Awakens was a beast of a movie, in every possible way. But you want to know something really cool? 3D printing was used to create many of the props – and to finish many of the props – used in the film. This shouldn’t come as a surprise, really, after the prequel films where lambasted for using too many digital effects in place of practical effects.

Anyway, 3D printing’s role in Star Wars: The Force Awakens was revealed when Disney showed off a truckload of props at two key Star Wars events in the lead up to the film – the 2015 Star Wars Celebration, and the Disney D23 Fan Expo. At both of these events, Disney’s props were displayed in glass cases, with useful details about how they were made.

One such prop was Kylo Ren’s hilted red lightsaber, which was entirely 3D printed. Another prop which benefited from 3D printing was Captain Phasma’s silver Stormtrooper armour – 3D printing was used to create several parts of this costume. The helmet, for example, was 3D printed using nylon, as were the shoulder plates. 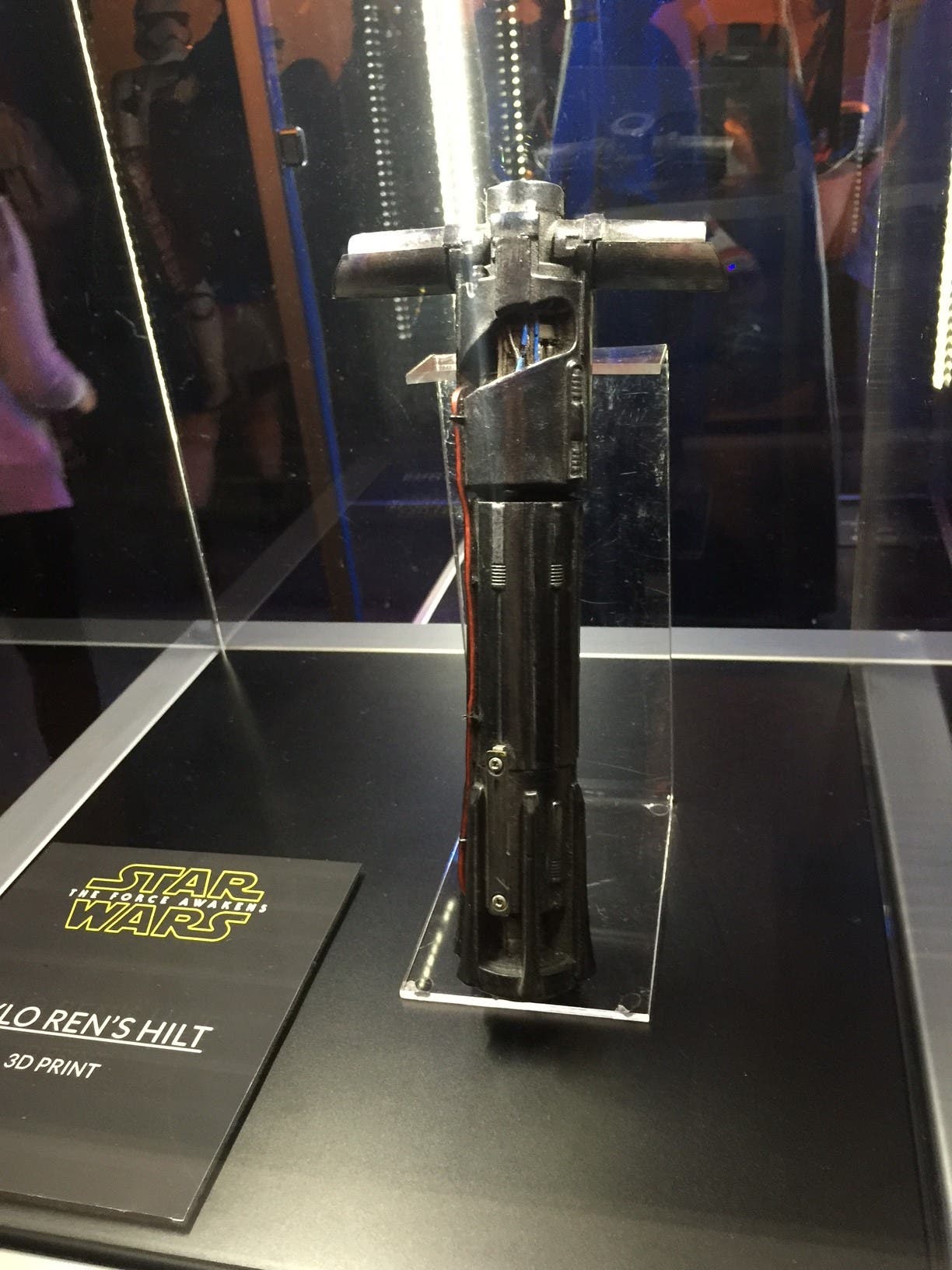 There were many other costumes and props that were 3D printed – rather than made using traditional manufacturing techniques – for Star Wars: The Force Awakens. We’re just thankful that any manufacturing took place, to be honest, because digital effects – while they have their place- are simply not the same.